Podcast: What is the role of theatre in the refugee crisis?

We’re currently witnessing the largest international migration of people and the worst refugee crisis since World War II. British theatre has a long tradition of holding a mirror up to the most challenging issues of our time, and the current humanitarian crisis is no exception. Recent months have seen many theatrical responses to the refugee situation by artists here in the UK, as theatre companies and artists turn their attention to the issue. 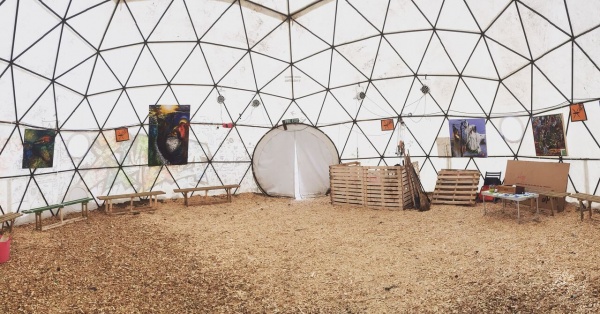 In December 2015, the Royal Court theatre in London hosted a special season of short films and features, shining a spotlight on theatre within refugee, migrant and asylum seeking communities; and last year, National Theatre Wales devised the excellent Bordergame with which online participants can still engage.

But what is the role of theatre and art in humanitarian crises like these? In dire times, is art just a frivolous distraction, or can it be used to heal and unify?

In this Arts podcast, we talked to Joe Murphy, who along with co-founder Joe Robertson, set up the
Good Chance theatre in the “Jungle” camp in Calais in response to the lack of community space. Their tent, before it was removed, was a space for refugees to tell their stories and express themselves, however they wish to.

Joe Murphy is joined by Zoe Lafferty and Shereen Zoumot, directors of Queens of Syria, a production devised and performed by displaced Syrian women. The play is based on Euripides’ Trojan Women, which is currently touring the UK with support from the British Council as part of our Culture and Development work, which seeks to create safe spaces for debate and exchange and give a voice to those affected by conflict.

“[Good Chance] allowed people feel like people, to laugh, to feel good about themselves. I think the experience of good art is to take you away from who you are for a single moment - whether that’s a minute, or an hour, or a whole day - and to take you into another place where you can forget whatever situation you’re currently in. If we can provide that, and allow people to feel like themselves again, then we’re doing the right thing as a theatre."

“Every person in our company’s dream is to go back to Syria and to the lives that they had. Being a refugee is only a tiny part of their lives. […] I’m always incredibly grateful to meet people like this who teach me what we should be doing as artists in the UK and how we should be taking responsibility."

Queens of Syria is a Developing Artists, Refuge Productions and Young Vic co-production, and is currently touring the UK; and Good Chance bring their Encampment programme to Southbank Centre’s Festival of Love from 30 July - 7 August.

Find out more about the Queens of Syria tour

Find out more about Good Chance Encampment at Southbank Centre

Queens of Syria and the British Council

First staged in Amman in 2013, and the subject of an award-winning documentary, Queens of Syria features 13 female Syrian refugees who skilfully amalgamate their own narratives of ferocious war and bitter exile with the ancient Greek text.

The British Council supported Refuge Productions and Syrian director Omar Abusaada to launch the project in 2013 and supported Yasmin Fedda in her production of the documentary of the same name. The British Council believes that culture has a key role to play in building peaceful, stable and equitable societies and communities, and that the arts and education can reach places that traditional diplomacy and aid cannot.

To coincide with the production's UK tour, the British Council has launched resources for schools to enhance young people’s understanding of these women’s experiences. The resources are available to thousands of schools in the UK and across the world through the British Council’s Schools Online platform.

@UKTheatreDance @Tara_Arts have another free Table Talk session coming up on the 20th May at 5pm Their panel discusses the topic o… https://t.co/7vWRl2yzuo
(1 days ago)

@UKTheatreDance Our friends @RifcoTheatre are looking for a digitally savvy professional to join their team as their Marketing and… https://t.co/4vd579IwPV
(3 days ago)