Outburst has grown from a small grassroots event into an acclaimed international festival. As it celebrates its 10th anniversary, Monica B. Pearl explores how its links with the Americas are challenging prejudice, developing artists and creating change – with this year’s programme including digital commissions and new work from Brazil and the Caribbean 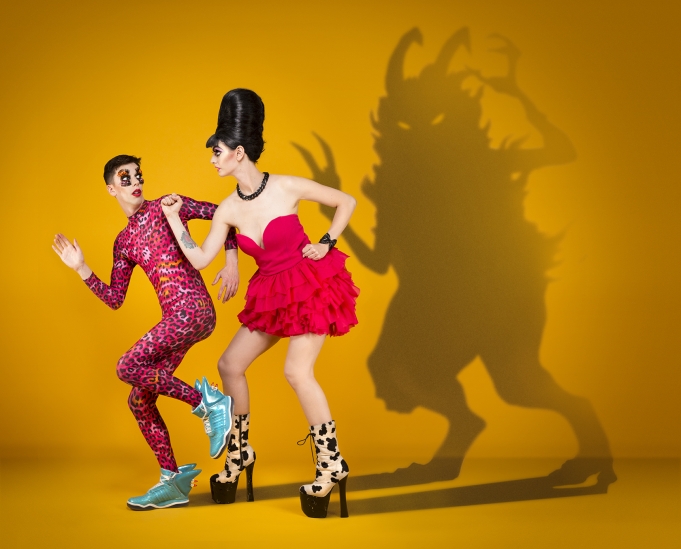 Bourgeois & Maurice’s How to Save the World Without Even Trying

There are so many concerns for lesbian, gay, bisexual, trans and queer people right now, says Ruth McCarthy, and it can be a lot easier to explore hard issues through the arts than in a dry political way. “Of course we need both approaches, but there is something about connecting at the heart level, rather than just the head, that the arts creates. And I think that’s why Outburst has captured people’s imaginations."

Ruth McCarthy, Artistic Director of Outburst, Belfast’s queer arts festival, is launching her programme for 2016 (10–19 November), marking the festival’s 10th anniversary. She has been at the helm of the festival through its evolution from a small-scale grassroots initiative into a 10-day international event. “The festival was initially driven by my passion and the expertise of others,” McCarthy remembers. However, she has become an arts director with extensive expertise herself: Outburst now produces and hosts award-winning projects, showcasing new queer art from around the globe.

“Outburst has been an ambassador for queer arts development”

The festival has always been international – “if artists were available and it didn’t cost too much,” says McCarthy. However, one of the fundamental ways it has grown is through its recent work with artists and arts organisations in the Americas. Over the past 18 months, McCarthy has been visiting the region and working closely with the British Council and its contacts to develop an understanding of queer arts and societies in this part of the world, particularly in Brazil and the Caribbean. “Through this work,” McCarthy comments, “Outburst has been an ambassador and touchstone for queer arts development and for the British Council’s approach to partnership building, skills sharing, and international collaboration.”

Outburst 2016 will showcase art that McCarthy has found on her travels, including a brand new UK-Brazilian collaboration. O Evangelho Segundo Jesus, Rainha do Céu is Natalia Mallo’s translation of Jo Clifford’s script The Gospel According to Jesus Queen of Heaven, which Clifford performed at Outburst 2015. This piece reimagines Jesus as a trans woman, and in the case of the Brazilian production, as a travesti woman – a term akin to trans but particular to Brazilian culture – played by Renata Carvalho. Clifford travelled to Brazil with the British Council in 2016, performing Jesus Queen of Heaven and leading workshops on gender and identity. It was this visit that resulted in the powerful and provocative collaboration with Mallo and Carvalho. 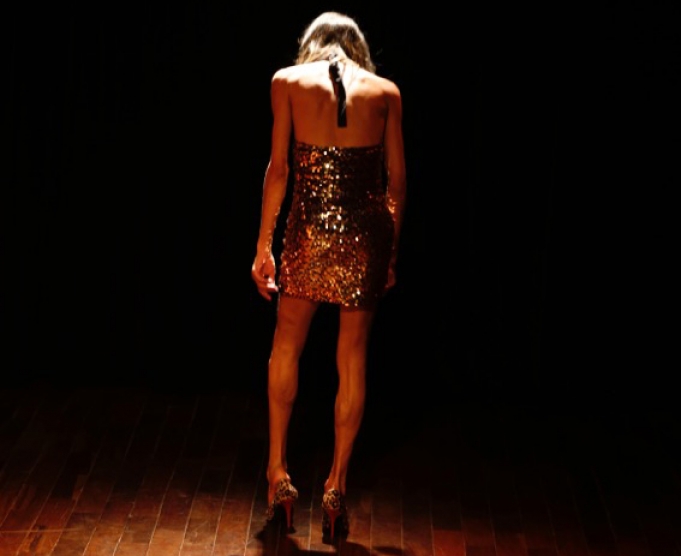 The festival opens with the world premiere of Caribbean Queer Visualities, the first group exhibition of queer visual art from the Caribbean, curated by the Small Axe Project. It was originally slated to open in Jamaica, but was displaced due to concerns about the “the nature of the work”. We should remember that homophobia in this country is the legacy of Victorian British colonialism, points out Annalee Davis, Arts Manager of the Caribbean for the British Council, who is based in Barbados.

McCarthy agrees that international relationships can have a destructive effect: “Other countries are dealing with crushing fundamentalism very much influenced by the United States and other first world countries.” Northern Ireland shares the Caribbean’s post-colonial mentality, she says, which makes the exhibition’s tour very appropriate and also potentially galvanizing. “The two regions share that particular mix of terrible oppression and fertile ground that makes for really interesting work,” McCarthy states. “The first time I got a sense that other countries were in a similar place to Northern Ireland, and that they were using arts to challenge transphobia and homophobia, I saw that we could work together and do exchanges on that.” That was the eye-opening moment, she adds: “when you realise you’re not on your own with these things. That other places are doing this.”

“Other countries are using arts to challenge transphobia and homophobia”

Like many places, Belfast faces problems with homophobia. “Northern Ireland is not an inherently liberal place,” comments McCarthy. It has not experienced recent changes in laws and attitudes towards lesbian, gay, bisexual and trans (LGBT) people in the same way as the Republic of Ireland and Britain have. “In a post-conflict society, LGBT issues have often gotten lost in a way they haven’t in the Republic of Ireland and in Britain. There is a higher level of homophobia in Northern Ireland.”

Alyson Campbell, Northern Irish director and Lecturer in Theatre at the University of Melbourne, has been making performances with Outburst from its early days, and reflects that her connection with the festival has influenced her practice. She cites her involvement with Theatre of Pluck’s Bison, which premiered at Outburst in 2009. Bison was conceived as a portrayal of gay male sexuality during a time of homophobic backlash from the Northern Irish government, and the performance subsequently played in London with an Irish cast to sold-out audiences. However, Campbell comments, “London didn’t need it in the same way; Northern Ireland needed it because it was a community under siege.” And in creating a departure from what might be thought of as more typical Irish theatre – always a “very formal style, very literary theatre” – it resulted in very queer theatre, one that interweaves community, performer, and audience. “Amazing things happen when you’re building on things year upon year,” Campbell states. “You develop a relationship with a particular community or a particular place, and that history and relationship becomes richer.”

“Ruth McCarthy sees herself not only as a festival director, but as a community activist” 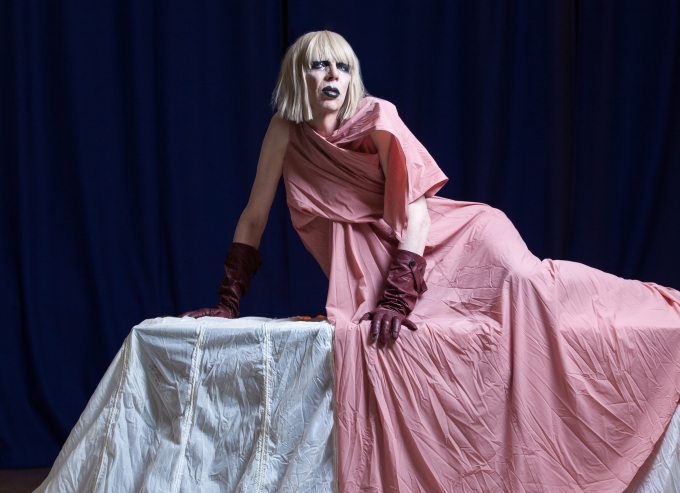 For McCarthy, Outburst is a form of community building, for those who define themselves as queer in the community and also those who don’t. She sees herself not only as the director of a festival but, importantly, also as a community activist. Her travels have led her to make an even deeper commitment to the potential for art to foment change, “especially in regions where queer arts and communities continue to be marginalised or are socially and politically excluded.” She also aims to bring queer art to people who might not yet know that they might want to see it. Outburst recently participated in presenting In and Out of the Closet, the paintings of Gerard Dillon, a renowned gay Irish artist at Ulster Museum, Belfast.

The international arts organisers think that sending homegrown queer work to Belfast will have an effect in their own countries. Davis suggests that creating press in the Caribbean about the exhibition in Belfast might ultimately allow it to be shown there. “It begins to create an intellectual environment that allows us to consider how we can foster that kind of work,” she says. “Maybe it has a future in Trinidad, which has had a Pride Festival.”

Mallo believes that “Renata Carvalho having a voice at the symposium and being invited to perform at Outburst is without doubt a turning point.” Not only a breakthrough for the performer herself, who has been making theatre for over twenty years, but, Mallo says, “It will also bring a positive perception to the Brazilian press and audiences. It enables a shift in the idea of travesti women being always excluded from public life, politics, and the arts.” With the endorsement and “support of well-known and prestigious organisations such as British Council and Outburst” the performance in Belfast is “of great value for Renata, for the LGBTQ artistic community in Brazil, and for both our societies to bring stigmatised identities to the spotlight and provide a proper world-class context for their artistic expression.”

Outburst 2016 opens with an international symposium on queer arts, welcoming artists, performers, producers and activists from Brazil, Venezuela, Trinidad, UK, Ireland, Jamaica, Colombia, USA, Canada and Argentina. Another part of the collaboration with the British Council, this day will pursue issues such as how to develop global queer arts partnerships and how best to nurture queer arts creativity.

As well as the Americas connection, Outburst and the British Council are exploring the idea of home through a series of digital commissions that audiences can view online. They’ve asked some of the UK's most cutting-edge artists – including Cat Brogan, Le Gateau Chocolat, David Hoyle and Gerry Potter, and Robert Softley, most of whom will be performing at this year’s festival – to create short films exploring the question: What does ‘home’ mean to us as queer people?

For those in Belfast, this year’s festival is packed with returning performers, small innovations and experiments, and some stars. Cult queer filmmaker John Waters makes his Outburst debut with a final night sold out show at the Lyric Theatre. Ten days of events include an eclectic film festival; fiction and poetry readings; writing, vlogging, and voguing workshops; and cabaret acts and dramatics by some of queer theatre’s stalwarts – Bourgeois and Maurice, Penny Arcade and Nando Messias. Theatre of Pluck and Alyson Campbell return with GL RY, which explores HIV and AIDS in Northern Ireland; there’s a new playwriting project with Tinderbox; A Tea Dance, a queer Irish language event, and Queer at Queen’s – an academic conference on the topic of Positive Futures: HIV/AIDS Disclosure, Prosecution and Performance.

“Yes, Ruth pitches to a core audience, but she also creates a new audience,” comments Colette Norwood, Arts Manager at British Council Northern Ireland. “It’s the nature of what Ruth McCarthy does. Other people just want to get involved. She’s an excellent curator and social programmer.” Norwood’s colleague David Codling, Director Arts of the Americas, agrees: “Outburst is a festival which has built a strong identity, attracting a wide spectrum of audiences, allies and funding without compromising its focus on artistic excellence and intellectual challenge.” Norwood enthuses, “It’s my favourite festival in Northern Ireland… it creates something else.” She echoes the sentiments of many people I spoke to about Outburst: “There’s a bit of magic there.”

Dr Monica B. Pearl is Lecturer in Twentieth Century American Literature at the University of Manchester. She chairs a number of panels at Outburst 2016.

> See the full programme for Outburst 2016

> Explore how we are working with Outburst

> Watch an interview with Ruth McCarthy about Outburst