“Writing can change the world”

Jo Clifford, the UK’s most well-known trans playwright, visited Brazil this summer with her moving, controversial show about Jesus, love and transphobia. As a Brazilian production of her play launches at Outburst 2016, she blogs about facing her fears, witnessing political upheaval and bonding with another country 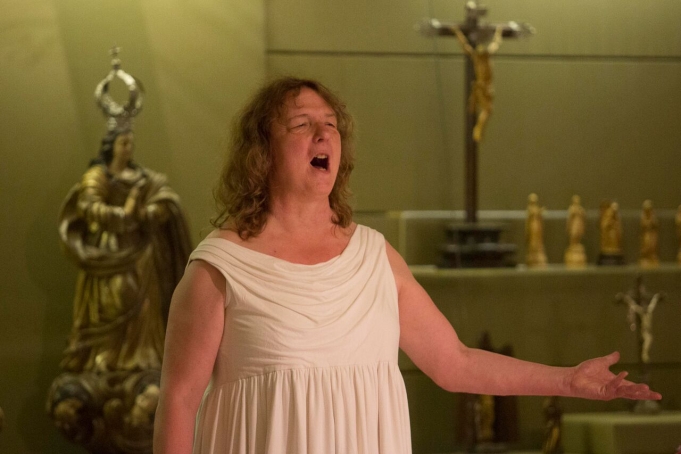 Jo Clifford in performance in The Gospel According to Jesus Queen of Heaven at FIT Festival in Brazil. Photograph: Guto Muniz

I love travelling, but being a trans woman can make it complicated.

It means I can never be altogether sure quite how people will treat me, and before this trip to Brazil I became very afraid.

I couldn't altogether understand why. It was my second visit and I felt so safe and happy the first time.

But now everything I read about Brazil seemed to be about how dangerous it is for trans women and how many of us are getting murdered.

And this time I was presenting my play The Gospel According to Jesus Queen of Heaven which imagines Jesus coming back to earth today as a trans woman.

The first time I performed the play, in Glasgow in 2009, it provoked much hatred: hundreds of demonstrators in the street outside, hundreds and thousands of hostile responses on the world wide web. And many horrible and hurtful things being said about me in the press.

I couldn't shake off the fear that something similar would happen again.

“I discovered that my fears had been mostly groundless”

The first place I was due to visit was the favela of the City Of God in Rio de Janeiro. Reading the book and watching the film did not help my feeling of apprehension.

We were guests of FLUPP, the remarkable and inspiring literary festival of the peripheries, whose aim is to empower the inhabitants of the favelas to create a new identity for themselves and heal the violence of the past.

Speaking of my life and work and performing extracts of the play in a packed community centre among such a committed and respectful audience was an overwhelming and profoundly moving experience.

I discovered then that my fears had been mostly groundless.

But needless to say, I'd also been alarmed by the political situation in Brazil. When I got back to São Paulo I led a series of writers’ workshops as a guest of the British Council and SESI’s Núcleo de Dramaturgia.

They were held in the building that had become the focus of pro and anti-government demonstrations. The first night we worked together in a room that gave onto the streets to the background of the whistles and drums and angry energy of the crowd outside.

The second night we were in a more secluded room in the basement and found ourselves welcoming two dignitaries. They were there to observe; but I don't allow observers in my workshops and they and their translators were invited to take part. There was something very moving and vital about the whole group of us, coming from such a very different places, sitting in a circle together and sharing our common humanity.

And all the while I felt the storm gathering outside. 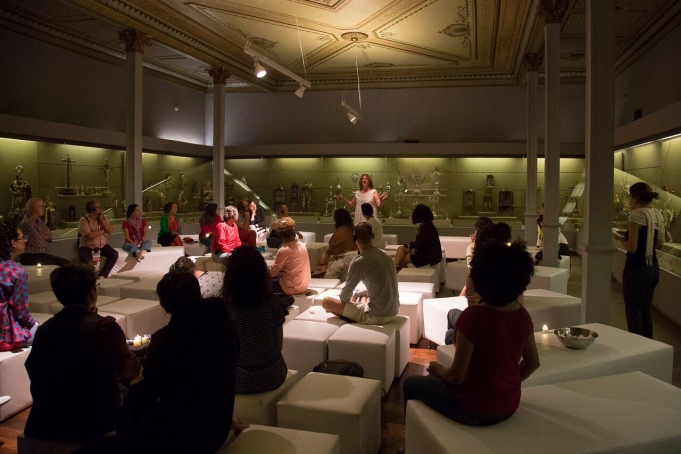 Audience hanging off Jo Clifford's every word. The Gospel According to Jesus Queen of Heaven at FIT Festival in Brazil. Photograph: Guto Muniz

We all crept in by the back entrance, and it seemed so incredibly important to create a space of safety and trust: somewhere the essential creative work could begin to happen.

Because I firmly believe that writing can change the world.

I needed to find that place of safety in myself during the days that followed. I don’t think I’ve ever given so many press interviews, or been written about with such respect and understanding. And so another of my fears bit the dust.

Meanwhile the new government, being hostile to LGBT (lesbian, gay, bisexual and trans) people in general and trans people in particular, had begun to restrict our rights to our social identities. And they were doing so in the name of Christianity and the family.

And here was me, an openly trans woman, a father and a grandmother, arriving with my play about a trans Jesus whose main message was that there is no place in the Gospels for transphobia and prejudice.

That on the contrary Jesus tells us all to learn to love each other as we love ourselves.

I felt it mattered hugely I was there. It was as if those performances I gave in the FIT (Festival Internationale de Teatro) festival in Belo Horizonte were the most important I have ever done.

All the performances sold out almost as soon as tickets went on sale; and I have never performed before to so attentive an audience or felt quite so strongly how much the words mattered. 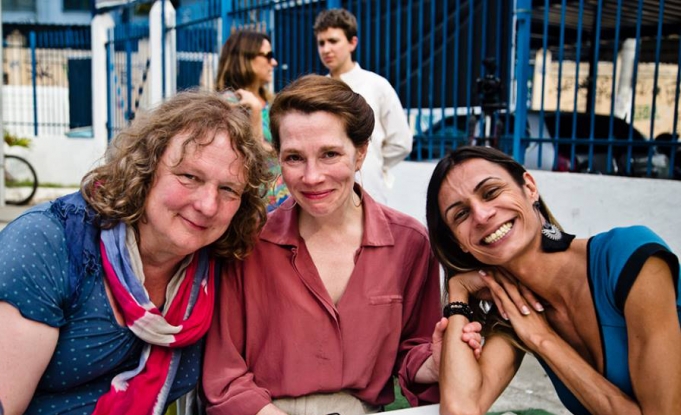 A story for another place, perhaps, is how the strain became too much for me and on the last night I collapsed onstage. The kindness and care I received in the days that followed were utterly remarkable and mean I now feel emotionally attached to Brazil for the rest of my life.

The crucial encounter in the last week was with Renata Carvalho, the trans actress who is to perform my role in the Brazilian production of the play.

I was so lucky to share the stage with her at a large public event that took place in the Instituto Tomie Ohtake in São Paulo where she performed extracts of the play in Portuguese.

She is an astonishingly gifted actress, and it moved me so profoundly to hear my words in Natalia Mallo’s beautiful translation and to watch the incredible connection Renata made with the audience.

The play looked as it had been created in Brazil and as if it belonged there.

Which now, like me, in so many ways it does.

Jo Clifford is a writer, performer, poet and teacher based in Edinburgh. She visited Brazil in May 2016. O Evangelho Segundo Jesus, Rainha do Céu, the Brazilian production of her play, is at Outburst 2016 on 11–12 November 2016. Both the visit to Brazil and the performance at Outburst were partnered by the British Council.