How punk inspired my work in live art

2016 is the 40th anniversary of punk. Here, Lois Keidan and Anthony Roberts remember coming of age during punk’s heyday and tell us how the movement inspired them to become trailblazers in live art 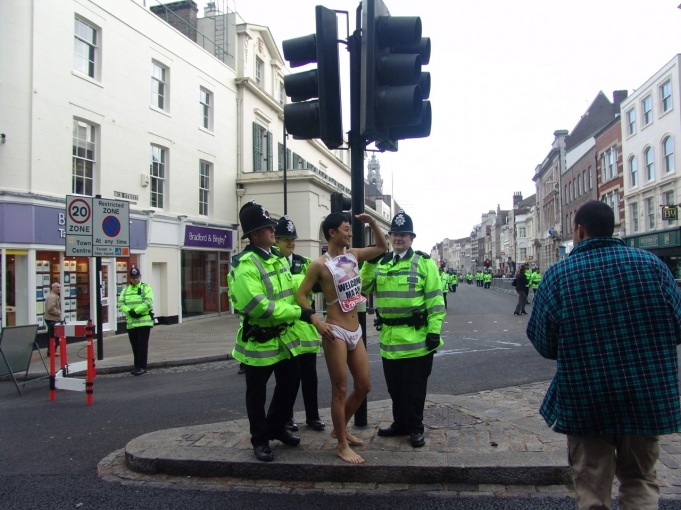 Beijing artist Wang Chuyu being moved on by the police as he waits to greet the Queen during the Live Art UK China Live tour in 2005. Photograph: Wang Chuyu

There have been some fascinating debates about the ‘institutionalization’ of punk on its 40th anniversary, with much outspoken resistance to punk’s fierce spirit being tamed in such ways. But as many know, the best, and even the most radical, ideas are often ultimately assimilated, appropriated and accommodated by the mainstream. And, more significantly for me, the institutionalization of punk only goes to show how the punk generation, or rather the generation most influenced by punk’s ideas, went on to run the world.

I came of age with punk music – my transition from school to university to the big wide world had punk and post-punk soundtracks. My first job was running an indie record label and managing post-punk bands in Edinburgh. I believed that punk had changed everything, but soon realised the one thing it hadn’t changed very much was the music industry itself, which remained as cut-throat and self-serving as ever as it gobbled up many of the more successful indie bands and labels in its pursuit of profits.

“It was art that rewrote the rules”

Disillusioned by the music industry, I went to work in an alternative theatre space in Edinburgh – Theatre Workshop – and soon realised that experimental, counter-cultural art practices, especially those of performance art, epitomised everything that punk was about: they brought together fashion, politics and art, they were artist-led and autonomous, they gave voice and visibility to the disenfranchised, marginalized and silenced. At the time, performance art seemed to me to be anti-hierarchical, involving audiences as equals and placing them at the centre of the work. It was art with an attitude, that could be done anywhere, and made with a distinct DIY or lo-fi aesthetic. It was art that rewrote the rules, that didn’t seek, or even want, permission from the authorities to exist, and found ways to bypass the gatekeepers of culture.

And so it is with performance art, or rather its evolved form live art, today. Like punk, live art is a way of imagining different ways of doing things and different ways of being in the world. Just as punk rethought how and where music could be played and who was playing it, live art is a way of thinking about what art is, what it can say and do, and how it is experienced. And just as punk gave a voice to the silenced and unseen, and set out to change public attitudes through movements like Rock Against Racism, live art is a space where many socially and politically under-represented artists construct and perform diverse cultural identities and influence public discourse.

“Just as punk rethought how music could be played, live art is a way of thinking about what art is” 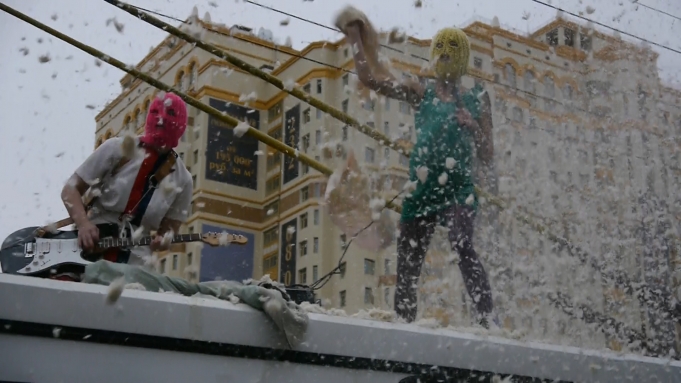 Perhaps the relationship between punk and performance art reached its zenith with Pussy Riot and their invasion of Moscow's Cathedral of Christ the Savior in 2012 and subsequent show trial. This was a group of artists as comfortable with the label ‘punk rock’ as they were with ‘feminist protest group’ or ‘performance artists’, because they were all of these things at once, but most significantly they were all about attitude.

I recently re-watched the BBC series on indie music, Music For Misfits, and was struck by some of the quotes about punk that could so easily have been about performance art or live art: “it was about attitude and ethos,” “it was a state of mind, a sense of rebellion,” “they were a ragtag bunch of outsiders and misfits,” “it was a statement of what I want to do,” “it felt attainable” and, most pertinently, from Pete Shelley of The Buzzcocks, “we decided to put on the show ourselves.”

Live Art UK is a national network of live art promoters coordinated by the Live Art Development Agency. At a Live Art UK event in China in 2004 and in a collection of Live Art UK case studies called In Time [pdf] in 2010, Anthony Roberts of Colchester Arts Centre drew parallels between his early adoption of The Ramones at school and his embrace of live art as a programmer. In both instances he felt that his peers considered him to be, by association, “in the vanguard of contemporary culture.” I asked Ant to expand on the relationship between The Ramones, punk and live art for this blog. This is what he had to say.

Was it really 40 years ago today that it happened? I can hardly believe it. I remember it so vividly. One of those moments when you remember exactly where you were and what you were doing when it happened. I was 16 years old and had just glanced at the mantelpiece in the back room of our large detached house in suburban Watford. I remember the colour of that mantelpiece and the objects that were on it to this day, including my brother’s radio.

There I was. Hair parted in the middle and not so much down to my shoulders as halfway down my back. Watford Grammar School blazer on. Probably thinking about my upcoming O-levels or maybe Karen Taylor from Watford Girls Grammar. Listening to John Peel. 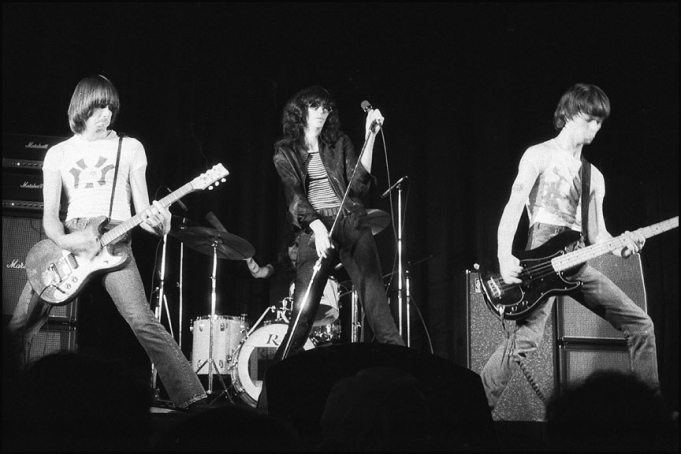 The Ramones in concert at the New Yorker Theater in 1976. Photograph: Plismo

Two minutes later my life had changed forever. I can't even remember what track it was he played. It was there, then it was gone. John Peel had played The Ramones and nothing would ever be the same again.

Everything in the room was exactly the same, and I can even remember looking at the objects on that pinkish 1930s mantelpiece and thinking how much the same they looked because now everything really was different.

There have been all sorts of clichéd TV footage and archive interviews in recognition of the 40 year anniversary of punk rock. I never went near a safety pin, I certainly never got near a pair of bondage trousers (tartan or otherwise), I never saw the Sex Pistols and I don't think I ever even bought that album either. I wasn’t a disaffected alienated youth on a working class estate in London. I was a quietly spoken, middle class, suburban schoolboy from Watford who fancied Karen Taylor for goodness sake.

The Ramones were a band from New York. It’s an unlikely marriage, let’s face it. But those two minutes were shocking and glorious.  Suddenly, like a cartoon revelation from the heavens, I realised that music could be whatever you wanted it to be, that your mates’ band on South Oxhey Estate could be better than Jethro Tull, that the rules weren’t set in stone, that ideas counted more than anything.

Fast forward to 1993. London, ICA. The National Review of Live Art, curated by Nikki Milican. A now well-trodden music fan is persuaded to go along. He enters… Result… Utter bafflement. Utter excitement. I had no idea what I’d seen. But once again I knew that life would never be the same again. Here was a voice that broke all the rules, that was now, that was uncompromising, that was seductive.

Somehow The Clash and Donna Rutherford held hands. Her voice and her orange (you had to be there) stood in sisterhood with The Slits. I seemed to have stumbled by accident into a room where integrity and derring-do danced to the same beat as Wreckless Eric.

And so to today. I live in a world where the seminal artist Joseph Beuys (“Every human being is an artist”) catches the same bus as the legendary band Captain Beefheart (“Scales are for fish”). Where the thrill of the next SPILL Festival of Performance is like waiting for the next Fall album (“Always the same, always different”) and where every performance bill with a host of names I don’t recognise is where I’m heading. For me there’s no better present than the present tense. Thank you The Ramones, thank you Nikki Milican.

PS. So I didn’t become an artist. But I did get my hair cut. Even if it did all fall out only 10 years later, that hair cut was massive. I’ve never looked back.”

> Check out Punk London, a year-long programme of gigs, exhibitions and films

@UKTheatreDance RT @BritishArts: This is Liverpool calling... Liverpool will host #Eurovision2023, which should be taking place in Ukraine. Our partners @…
(2 days ago)

@UKTheatreDance RT @BritishArts: The International Radio Playwriting Competition 2023 is open for entries! Are you a promising writer living outside the U…
(1 months ago)