Video: Birds of Paradise reimagines The Tempest as a trial by TV

Can you skype a performance? Birds of Paradise performed its new reworking of Shakespeare’s Tempest with a live video link between Hong Kong and Glasgow. Exploring reality TV and social media, the production uses four different languages, including sign language. Watch the artists describe how they made the work

A new version of Shakespeare’s The Tempest took place simultaneously in Hong Kong and Glasgow, using technology to link performers and audiences in each city.

Miranda and Caliban: The Making of a Monster is a new work by the Scottish inclusive theatre company Birds of Paradise, made in collaboration with Arts with the Disabled Association in Hong Kong (ADAHK) and performed in November 2016 at the Centre for Contemporary Arts in Glasgow and Kwai Tsing Theatre in Hong Kong as part of the New Vision Arts Festival.

"We live in a multilingual world"

The main characters appear on a talk show with a TV judge. Prospero is in the Glasgow studio, while Caliban is in Hong Kong and we see video diaries from Miranda. The show invites audiences to interact on social media, mixing fun requests with more disturbing questions. “Everyone now can comment on a death or an incident on Facebook and Twitter,” says Robert Softley, Artistic Director of Birds of Paradise, in the video above. “But it’s always at a distance. It’s always removed.”

The show explores communication on many different levels: it is performed in English, Cantonese, British Sign Language and Hong Kong Sign Language. “This mixing of languages and cultures seems very natural to Hong Kong,” says Garry Robson, Softley’s co-director. “We live in a multilingual world and that’s the world I want to celebrate.” 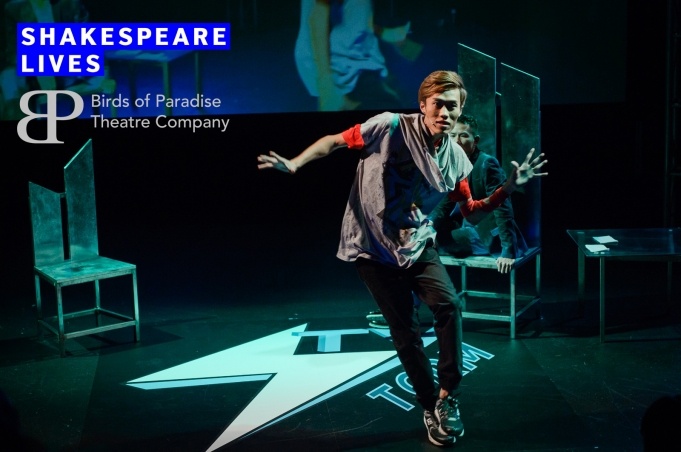 Robson and Softley felt that Hong Kong could shed a special light on The Tempest, being an island and having a history of colonialism. And they were interested in exploring the theme of ‘the other’ in Shakespeare’s play and in disability culture. “What is it to be the other?” asks Softley. “And how is the other perceived in mainstream culture?”

“In Hong Kong, I think this commission really opened up people’s minds as to how the arts can help to empower disabled people,” says Antony Chan, Head of Arts and Creative Industries at the British Council in Hong Kong. He is keen for the British Council to work more closely together in the future with ADAHK, as well as others who are committed to developing and promoting disability arts. He'd also like to see more collaboration and exchange between disabled artists in the UK and Hong Kong.

“This is what inclusive theatre is all about”

The production was made as part of Shakespeare Reworked, a series of commissions from the British Council that encouraged UK artists to work with international partners and experiment with new approaches to Shakespeare.

“This is what inclusive theatre is all about,” continues Chan. “Performers and audiences, disabled and non-disabled, in Hong Kong and Scotland, all involved in creating an inspiring performance together.”

Miranda and Caliban: The Making of a Monster was commissioned by the British Council for Shakespeare Reworked as part of Shakespeare Lives, our programme of international events and activities marking the 400th anniversary of Shakespeare’s death in 2016. It was presented jointly with the Leisure and Cultural Services Department in Hong Kong and supported by Creative Scotland, Glasgow Life and Arts with the Disabled Association in Hong Kong (ADAHK).

> Follow Robert Softley’s story in How I Became an Artist

@UKTheatreDance RT @BritishArts: Installation artist @MattRosier joined us in October for our Ise City artist research residency. While in Japan he was par…
(1 days ago)

@UKTheatreDance RT @blcktheatreclub: Let us know shows at this years @VAULTFestival starring, written or directed by Black / mixed race people so we can sh…
(2 days ago)

@UKTheatreDance Are you an early maker, or an artist whose practice may have been overlooked, with something meaningful to say?… https://t.co/pRtqyfSKNG
(4 days ago)