What does theatre have to say about democracy?

In a new series for Culture after Brexit, Lyn Gardner embarks on a journey to explore the dynamics of theatre in the UK and EU. First, she visits this year's Holland Festival to investigate artists' views of democracy. Here she reflects on performances from the UK, Netherlands and Germany that feature topical debate, satirical manifestos – and Cate Blanchett 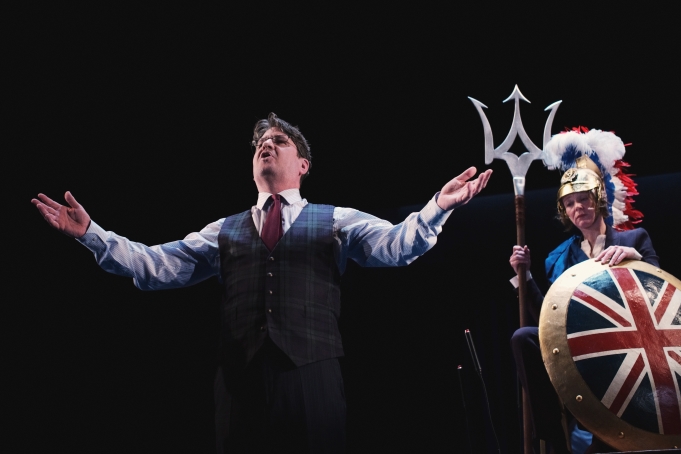 My Country; a work in progress. Photograph: Sarah Lee

Democracy has been one of the major themes of the Holland Festival, which turns 70 this year, and in particular the role of artists in responding to the seismic shifts that have called traditional representative democracy into question and seen the rise of populist movements across Europe, the election of Trump in the USA, and of course the Brexit vote.

New York's Public Theatre has been in Amsterdam with Richard Nelson's epic The Gabriels, following one particular American family through the 2016 election year. Meanwhile the Italian director, Romeo Castellucci looked at the Athenian roots of democracy in La Democrazia in America. Peter Sellars and Reggie Gray's Flexn considered the street dance form, Flex, as a movement form born of social unrest.

In case we were in doubt of the links between theatre and democracy, Sellars was on hand to take part in a discussion about theatre and democracy as part of the festival. He explained that in Ancient Greece attending the theatre was considered a necessary requirement for eligibility to vote. The Greeks understood that sharing experiences, particularly the experiences of those who look, sound and think differently to us is a way of understanding the world around us. But can theatre today fulfil a similar function?

It can certainly offer a chance to hear some of those different and different sounding voices, particularly those too often ignored. The National Theatre's production of My Country: a Work in Progress, a rapid response piece made in the wake of the EU referendum result that initiated Brexit, was lent a heightened relevance because it was playing at the Stadsshouwburg in Amsterdam, on the very night that the UK electorate was going to the polls.

"Sharing experiences is a way of understanding the world around us"

Not long after the post-show discussion for My Country had finished, the exit poll indicated that the British people had not given Prime Minister, Theresa May, and her Tory government the landslide victory expected by almost all pundits across the political divide. The exit poll was proved right in a night when the drama of the political stage was more exciting than anything that theatre could possibly generate.

The swing against the Tories can in part be explained by the fact that an unexpectedly high proportion of young people, 72% of 18 to 25-year-olds, exercised their democratic rights and voted, many for the first time. In many cases, expressing their disquiet about Brexit.  But will it really bring about the change these young people crave, and what happens if it doesn't? Will they continue to use their vote at the ballot box to express their disquiet as many of the leavers who voted for Brexit did? Or will they withdraw from the democratic process entirely?

In the wake of the Brexit vote, a clearly shocked Rufus Norris had announced the "listening project" that became My Country, a verbatim piece based on interviews with ordinary people across the country. As Norris, Artistic Director of the National Theatre, said then, "art always responds to the time, and this has been a huge wake-up call for all of us to realise that half the country feels that they have no voice." He added: "If we are going to be a national organisation we must speak to and for our nation. Our principal response initially is to listen: to listen to that voice and art will follow from that."

In many ways that is a significant shift from the movement that led to the setting up of arts festivals in post-war Europe such as Holland, Avignon and Edinburgh International Festival – which optimistically thought that where the politicians had failed, artists might have the answers about how to remake a devastated post-war Europe. That was a big ask then, and it's an even bigger ask now when there are such divisions in society and when the arts in many countries across Europe are facing funding cuts.

"Art always responds to the time" 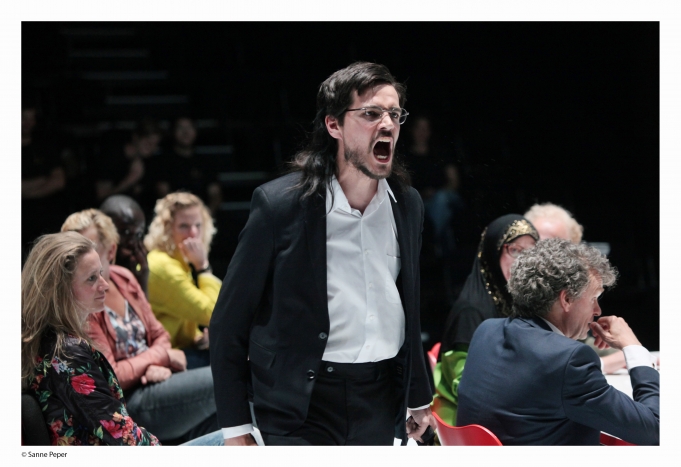 In any case, as Julian Rosefeldt's Manifesto, an installation of 13 films at Amsterdam's Casco demonstrates, there is a significant difference between artists issuing manifestos for change – as they have regularly done over the centuries – and making art that actually brings about change.

Manifesto takes 13 manifestos made by different artists espousing artistic movements from the Situationists through Dadaism to the Fluxus movement and has them performed by Cate Blanchett as monologues in a dramatic context.

As a European choreographer directing a Broadway chorus of aliens, Blanchett announces amongst other things that "life is an artwork and the artwork is life." As a homeless man, she speaks the Situationist slogan that "the role of the artist can only be that of a revolutionary". You can hardly disagree with either statement. But the emptiness of sloganising is underlined as a voice from one installation drowns out that from another, constantly reminding us how much noise and how many voices are clamouring for attention in the world.

These exquisitely produced mini dramas sometimes make these artists' words sound brave, moving and rousing, but often they just make them sound funny. The manifesto for conceptual art is delivered with Blanchett as a TV news presenter and reporter; a manifesto for pop art is spoken by a conservative middle class mother at the family dinner table; Vorticism is hilariously sent up with Blanchett as a smugly sleek CEO hosting a soiree for the rich and privileged.

I enjoyed it immensely, but in many ways Manifesto can be viewed as a satirical comment on how it is not what artists say but what they do that matters. In that respect they are no different from politicians who issue manifestos which, as every voter knows, too often turn out to offer empty promises. Just how empty has been cleverly demonstrated in recent shows in the UK by theatre-makers Nic Green in Cock and Bull and Lucy Ellinson and Chris Thorpe in #Torycore.

Of course it is absurd and utterly unfair to expect artists to provide the solutions to a society in crisis, but the least they can do is try and reflect it in all its complexity. Eric de Vroedt, recently appointed as Artistic Director of Het Nationale Theater, attempts to do this in The Nation, a vast sprawling Dutch soap opera of national concern and themes that will eventually encompass seven episodes. It includes one delivered via a virtual reality experience, a reminder that theatre needs to embrace new technologies and new ways of distribution.

De Vroedt describes his show as "a Netflix series on stage". It's an ambitious attempt to use a popular form and it draws on different TV genres, from the police drama to the late night discussion show. A racy and seductive thriller narrative about the disappearance of Ismael, a young Muslim boy last seen at the local police station, engages audiences with urgent issues. There's the radicalisation of young people by Isis, institutional racism, and police brutality. It illustrates how surveillance and technology in everyday life sometimes asks us to trade our safety for control and the risk of discrimination.

But it's not just about issues. Through allowing us to engage with characters over a long period of time, as we would when binge watching a box set, The Nation shows how we construct our individual identities and reduce those who we perceive as being different from us to stereotypes.

Both My Country and The Nation bring the voices of those who often remain voiceless to the stage, but in its well-meaning desire to open up the stage to those who seldom are given a voice My Country narrows its focus so much that it merely ends up offering soundbites, confirming what we already know or think we know about those who voted to leave and playing to the stereotypes. It's good to give the voiceless a voice, but not at the expense of a plurality of voices and views. Listening may not always be enough. If theatre really wants to bring about change it needs to work within and with communities, and over a long period of time.

Theatre is often at its most exciting when it is exploring conflict and The Nation finds a way through form, complexity of character, situation and through its epic scope to raise a debate about who we are and how we see the world. It's only when presenting a spectrum of differing voices and views on stage that theatre truly reflects the complexity of the world in which we live, the things that divide us and the things that unexpectedly bring us together. It's in those moments that it becomes a crucible in which to discuss and debate how we might live, and how democracy might flourish.

Lyn Gardner is Theatre Critic for The Guardian, Associate Editor of The Stage and an author of children's books. @lyngardner