"Shared stories keep us together"

Will artists from the UK and EU still work together after Brexit? Nocturne, part of LIFT 2018, was created by the UK’s Andy Field and Latvia’s Krista Burāne. They speak to Lyn Gardner about collaboration, nature and public space in our latest Culture after Brexit blog 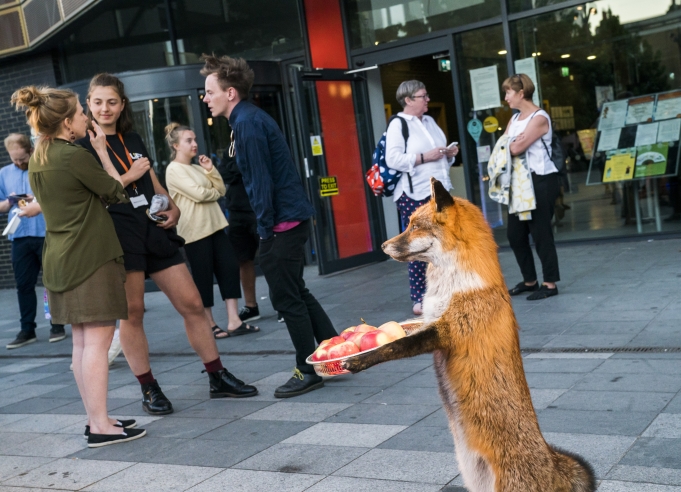 Are foxes intruding on human space or are we a guest in theirs? Nocturne looks at the fragility of our place in the world. Photo: Nocturne at LIFT Festival by Tristram Kenton.

The tipsy man lurching against a lamp-post blinks and shouts his surprise to see a small group of six people shuffling along Deptford High Street, each holding onto a rope which is tied around our guide's waist.

It's dusk in south east London on an exceptionally warm summer's evening. The group of strangers clinging onto the rope are not travellers embarking on a perilous journey, but members of the audience for Nocturne, a new piece made by British theatremaker Andy Field and Latvian artist Krista Burāne.

Co-commissioned by the London International Festival of Theatre (LIFT), Lokal and Homo Novus, Nocturne will also be playing in the Latvian capital, Riga, in early September and Iceland's Reykjavik in November. In each city audiences will take an urban trek into the wild via a series of looping walks which Burāne and Field see as a physical reflection of the loops, patterns and refrains of a piece of music. The loops also reflect the fact that, unlike humans, animals don't lead linear lives.

"We began the project," says Field, "looking at animals as an intrusion of the human space. We looked at stories of wild pigs glimpsed in Riga, or the huge numbers of foxes that live in London. But as it developed, we started to see ourselves as the intruders. Once you start thinking like that you start to feel the fragility of our occupation of these spaces."

Deptford, a corner of London which was once entirely woodland stretching for miles, is now sprouting with new-builds and rapidly gentrifying. But on Deptford Creek, plump ducks sit snoozing on oily slicks of water as they have for hundreds of years. Midges dance under a street light. Insects chirp in the long grass by the housing estate. A looping snail trail is visible on the wall.

At its best, Nocturne makes you look and listen a little harder. Even sniff the air harder. It reminds you that the midges and moths were here before us, and the wild will be here long after we have gone. We are as fragile as the moth's beating wings. The way it makes us confront our own ephemerality recalls the aching loss of both French and Motterhead's Woodland and Belgian company Ontroerend Goed's World Without Us.

"Nocturne comes out of artists from different countries meeting" 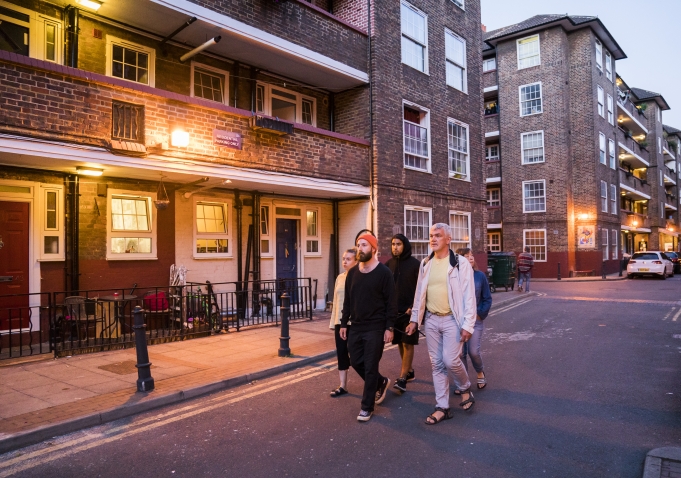 Nocturne is one of those collaborations that comes out of artists from different backgrounds and different countries meeting, discovering shared interests and the desire to make work together. The process may be eased by access to funding pots. But the impetus is simply two people from different parts of Europe meeting as a result of the Urban Heat project. Burāne and Field discovered a shared fascination in place and space, and how that might be worked into geography and architecture as a performance.

"We wanted to make something," says Burāne, "that thought about the relationship of the spectator to the piece and the constant shift in modes of spectatorship. When the spectator becomes a full participant it also raises questions of responsibility."

By shifting the gaze, Nocturne makes us see the familiar city in a different and less comfortable way. Deptford suddenly seems wilder, more unpredictable, less domestic. As if something hidden beneath the concrete is trying to burst through like the ivy creeping through the graves in the churchyard. The final walk is designed to be undertaken alone without the comfort of a guide. You must take responsibility and can rely only on yourself.

Making the show in three two-week residencies in London, Riga and Reykjavik, has informed a piece that will be markedly different and responsive to each location. It has made both Field and Burāne aware of the differences between the cities and the different way each country approaches arts practice.

Burāne is a bit taken aback by the rules and health and safety regulations that pin the piece in a British context. Spending time in Riga made Field realise, not just how crowded London is as a geographical space, but also how the politics of class, race and economics impact urban work.

"When countries are moving in different directions it is important for artists to meet, share ideas and collaborate" 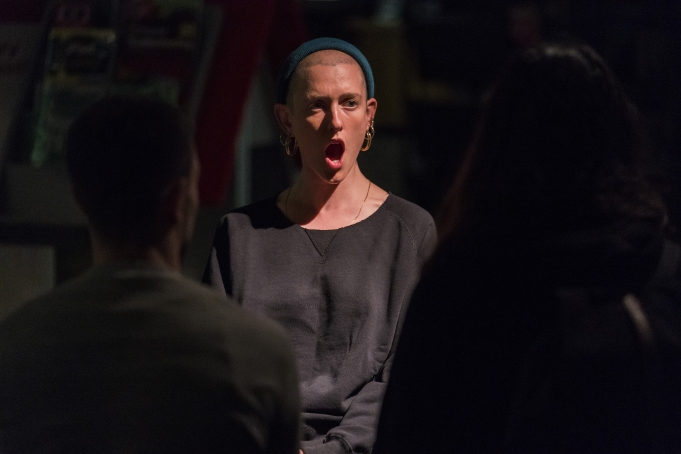 As a site-specific piece, Nocturne will take on a new life in Riga and Reykjavik. Photo: Nocturne at LIFT Festival by Tristram Kenton.

"The arts in the UK have such a difficult and complex history with space and place," suggests Field. "Any occupation of public space comes with responsibilities to those who live there and a need for real sensitivity."

During Nocturne in London I thought about how human attempts to marginalise wildlife in urban spaces may have parallels in how thousands of long-term — but more economically deprived — residents of the city are being squeezed out by rising rents and the privatisation of social housing.

"If you are making a piece of art about the city, you are acutely aware that if a city is trying to force some people out and attract others to come, the work you are making may be part of that social engineering," argues Field.

It's not that Burāne is any less aware of these issues, but she says that in Latvia "I am a socially active artist" adding that, "in Riga I can be an artist without speaking about social things. However, here in the UK the funding system makes you prove that you are making socially active work."

Yet one of the interesting things about Nocturne is the unassuming way it tries to be sensitive to the social concerns that its very form — a walk into other people's territory — throws up, without actually addressing those social concerns head on.

It's politics are subtle, and it is self-aware. It will be fascinating to see how the Riga and Reykjavik versions differ, because this work is genuinely site-responsive; a reflection of the changing face of London both in the past and at this single moment of time.

"This Brexit moment is only one moment" 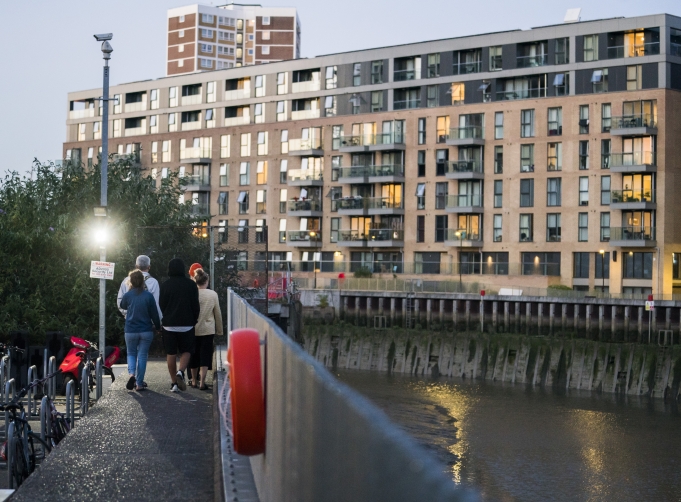 Field is optimistic that shared stories and identity mean artists in the UK and other parts of Europe will keep working together. Photo: Nocturne at LIFT Festival by Tristram Kenton.

In Deptford, Nocturne has been presented as part of LIFT which over its 37-year history has brought artists together from all across the globe and allowed them to connect with each other. International collaboration was and continues to be its lifeblood, and Burāne and Field's Anglo-Latvian collaboration reflects that.

As it moves towards Brexit the UK may be in the process of severing links with Europe, but Latvia is moving in the opposite direction and strengthening its ties. As Burāne points out, "Latvia sees the EU as a way we can exist independently, and we see the values of the EU as important. We are a young country, we need and want the support that the EU gives us."

But perhaps when countries are moving in different directions, it is even more important for the artists from those places to get the chance to meet, share ideas and collaborate. Field is both devastated by the prospect of Brexit but also optimistic that artists across Europe will still find ways to work together.

"It is a deeper sense of shared history, shared identity and shared stories that keep us together, not funding streams. Those fleshy connections are deeper and more profound than human machinations. It's not as if the UK is going to be towed out into the Atlantic and the email cut off. But the urgent thing to do is to consolidate the personal and artistic relationships that artists in the UK and Europe have made with each other.

"One of the things that working on Nocturne has made me realise is that everything changes and is temporary. This Brexit moment is only one moment."

Lyn Gardner is a journalist and novelist. She is associate editor of The Stage and an author of children’s books. @lyngardner

This feature is part of Culture after Brexit – a conversation, curated by the British Council, about the future of the cultural relationship between the UK and the European Union after Britain exits the EU.

> Read an article by Andy Field on Nocturne in Exeunt

> View a gallery of photographs by Krista Burāne

> Read about LIFT's legacy and its future in Whatsonstage.com

> See more on Urban Heat, an international project on artists and cities

> Tim Etchells: "When we first went to Europe we found another world"

> Circus: The future of circus is social

Blog
"When we first went to Europe we found another world"

Blog
What does theatre have to say about democracy?

Blog
The future of circus is social