Fierce, funny and feminist: The Roaring Girls are in town

The Roaring Girls are taking the Edinburgh Fringe 2019 by storm with their Recommended Show, Beach Body Ready. They talk to Eleanor Turney about kindness, fatness and self-acceptance 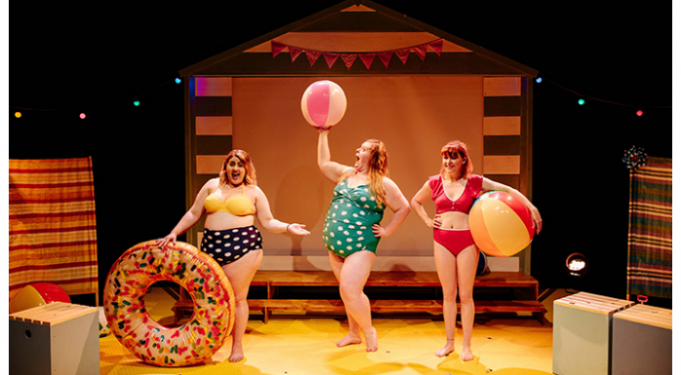 The phrase Beach Body Ready conjures up (in the UK, at least) a particularly offensive advert for some diet product or other, which was plastered across London and subsequently became one of the first adverts to be banned for presenting unrealistic body image. In The Roaring Girls’ new show, currently on as part of the Edinburgh Fringe and a British Council Showcase Recommended Show, the phrase is being reclaimed. And then ripped into fierce, funny, feminist shreds.

“This show is causing people to feel the need to comment on our bodies. Which is just proving our point,” laughs performer Jess Morley.

The show is also having an affect on audiences, they tell me: “Our audiences have said they wish they’d seen this show when they were younger, when they were kids,” continues Morley. “We’re hoping to take it on a schools tour because it’s that repetitive pattern – our mums did the same things, their mums did, it’s this horrible cycle where we’re still feeding into the same ideas. If even a few people who see our show go home and talk more positively about their bodies in front of their kids… that’s brilliant.”

Abbey agrees: “We’ve had a dizzying amount of people coming to talk to us after, and we always say we’ve done our job if people want to tell us their stories. We’ve had doctors in who’ve said it’s taught them how to talk to their patients about fatness, and how to talk about bodies more positively. We’ve had teachers who are desperate for the show to come into schools. We’ve had entire Weight Watchers groups ask for the show to come in, so they can focus more on self acceptance and being positive, rather than hitting targets and just losing weight.

“We’ve had people who’ve suffered with eating disorders come in and relate to the show in various ways. People feel heard. I say in the show that I don’t do online dating because then people will see how fat I am, and we had a lady come and say to us after that she sometimes uses a wheelchair and that’s why she doesn’t do online dating, which was a parallel that was a new thing for us to consider. The same behaviour to avoid difficult situations.”

'We've had audience members shouting things out, or sharing, or heckling – which we love. We love rowdy women!'

For Penney, ”the audience’s responses in the room have been really special. It’s a big conversation more than it is ‘theatre’, and we want audiences to feel that they’re with their mates having a chat and sharing stories. That has led to audience members shouting things out, or sharing, or heckling – which we love. We love rowdy women! My favourite is having photos sent to us on Facebook and Instagram of women in their bikinis. They say, I’m not brave enough to show this to the world yet but I want to introduce my body to you. Them feeling comfortable to share that vulnerable part of themselves with us is so touching and so special.”

There have also, as with The Gaurdian commenters, been criticisms. “One of the responses we got online was that we were endorsing a stereotype of fat women who love food and hate exercise,” says director Lizi Perry. “And I’m sure that does fit into a stereotype but it also happens to be true for these particular fat women. We’re not trying to speak for all women. Some fat women do love exercise, and that’s wonderful, too. And it’s about the ‘acceptable’ face of fat, which is being fat but fit. And we’re trying to say that’s not where your value lies. Your worth is not tied to your size or your appearance.”

Exactly, says performer and company member Rachael Abbey, “you don’t need a qualifier to make your body acceptable, and that’s at the heart of the show. These are our bodies. And we deserve love, respect and to appreciate ourselves. We’ve been told for so long we’ve got to look a certain way, but the ‘ideal’ body is constantly shifting.”

But of course, in a capitalist society, being OK with how you look doesn’t sell products and doesn’t keep people (mostly women) buying things to change or improve how they look. “Exactly, says Sarah. “If you’re happy, you stop spending money.”

'We’re trying to say that’s not where your value lies. Your worth is not tied to your size or your appearance'

The show is going down well with audiences, and the team are having a good time – something that doesn’t always happen during the manic Fringe. “There’s a fear of coming to Edinburgh,” says  Perry. “And the worry is it’ll be really competitive and cut-throat, and we’ve found it such a supportive environment. There’s a really supportive vibe and people speaking well of each other’s shows, which is really lovely.”

“It’s been overwhelming,” agrees Abbey. “It’s amazing considering it’s our first time up here as The Roaring Girls. We’ve had some lovely press but most importantly we’ve been getting some lovely feedback from our audiences. A lot of people come out crying. Being able to be there with our audiences and to help them through it is amazing.”

The show obviously taps into something in the zeitgeist; a proudly feminist show that ties into wider conversations around women, equality and #MeToo. Perry says: “It’s strange for us because we’ve been on this journey for two years, making this show. When we first started there weren’t a lot of people talking on a national platform about it, and now lots and lots of people have joined that conversation.

“That’s a good thing because the work that we make is all about opening conversations and getting people who have not actively engaged with it directly to take that step. So it’s been really nice to feel that there is a network of people talking about similar themes or ideas. There’s this network of amazing women and female-identifying artists who are just bringing up all of these themes that are really important to us, to this year, to right now.”