'You don't have to speak for me because I'm here'

Are festivals that look to centre and support otherwise marginalised artists still necessary? Nkenna Akunna looks back at the This is Black festival as she searches for alternatives to the gruelling schedules of the Edinburgh Festival Fringe. Speaking to playwrights she explores making space for a plurality of voices within the UK black experience 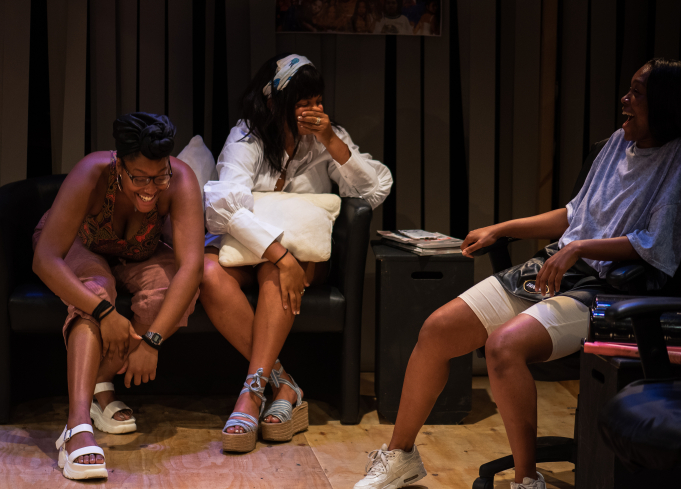 If you are a UK-based theatremaker, and in some instances even if you're not, August is a standalone month. Schedules are blocked out, overpriced train tickets are booked, and out-of-office emails abound. August is about the Edinburgh Festival Fringe, the 52 year old cultural event that maintains a strong gravitational pull for creatives worldwide.

For many, showing at the Edinburgh Fringe is a marker of validity, a signal of success. It's a chance not only for your work to be seen by those with the power and influence to programme it elsewhere, but it is also an opportunity to spend a month completely and totally dedicated to your craft. To eat, sleep, and breathe your multiple shows a week, to flyer in the spaces between, to see work, and to be inspired by the range of possibility within staged performance. To live as an artist. And isn't that the dream?

It is, in theory. In reality, it is also really expensive. Between inflated living costs, mental exhaustion and undesirable ticket sale splits with venues, theatremakers don't expect to make money during the Fringe. They expect to lose it, sometimes in the thousands. There are very few safety nets for those without the benefit of sufficient funding or an established producing partner. For artists who already experience some kind of marginalisation in the industry, taking work to Edinburgh in August can also be an issue for personal safety and sanity. Perhaps our obsession with the Fringe is akin to sadomasochist delight. It's a kind of hazing.

The festival has a diversity problem, audiences and artists are mostly white and able-bodied. Selina Thompson describes 'looking out into a white audience, and feeling horribly, horrifically alone' in her article 'Excerpts from the diary of a Black Woman at the Edinburgh Fringe'. Travis Alabanza, who took their show Burgerz to the Edinburgh Fringe in 2019, was surprised to discover that, even as the population of Edinburgh swells in August with theatre-goers from around the world, 'at some shows I still spotted only one other black person in the crowd.'

Knowing I didn't have the means to give into the gravitational pull in 2019, I started thinking about spaces that, whilst not aiming to be an equivalent to the behemoth that is the Edinburgh Fringe, seemed designed to cater to audiences' desire for contained variety. I thought about smaller, more modest festivals that still had a keen focus on varied storytelling and platformed underrepresented voices. I was drawn to the This is Black festival at The Bunker Theatre in London.

Campaigner, writer and director, Steven Kavuma, created This Is Black as a reaction to the Edinburgh Fringe. 'If Edinburgh wasn't going to be a viable option for me and other artists like me', he told the Independent 'I wanted to create a space that was, and I named it appropriately: This is Black.' 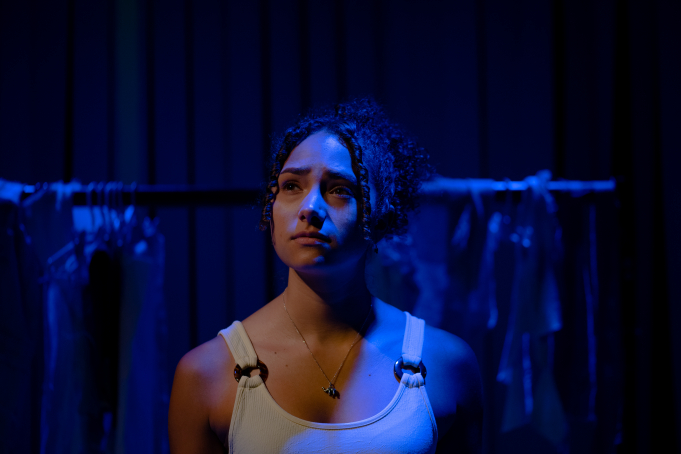 This Is Black held from 5-25 August 2019, was a small festival focused on showcasing multiple black voices. It consisted of four shows, Blue Beneath My Skin by Macadie Amoroso, All The Shit I Can't Say To My Dad by Abraham Adeyemi, Pyneapple by Chantelle Alle and Melissa Saint, and Teleportation by Ronke Adékoluęjo.

The idea behind This Is Black was to provide a space dedicated to the multiplicity of black voices. This sits well within this moment that many have deemed a renaissance for Black British theatre. However, let's face it, showcasing a plurality of voices within minority groups is always timely in an industry that still regularly flattens blackness into a singular experience: 'With few exceptions, the cultural gatekeepers only let through a narrow channel when it comes to black experiences', Felix Cross told The Guardian in 2015. 'They love urban and gritty, as though that is all we are.'

I am always appreciative of work that aims to speak directly to and about the specificities of Black Britishness. In Amoroso's Blue Beneath My Skin, the biracial protagonist struggles to define her identity in the hostile spaces she is forced to call home. Adeyemi's Shit I Can't Say To My Dad dove deep into Black British masculinity as shaped by paternal relationships. Pyneapple, which you can catch at London's Vault festival this March, is described as a female response to the Barbershop Chronicles. It depicts four distinct black women sharing the joys and trials of living, working, loving and trying to succeed as marginalised people in a rapidly gentrifying London. In Adékoluejo’s Teleportation, an unlikely relationship between a black nurse and an ageing white disabled veteran blooms.

It is of course impossible to contain a true multiplicity of blackness in a four-show festival. However, intentional curation and attention to production detail can highlight the existence of complication and nuance within a so-called collective racial experience, even if doing so is uncomfortable. By my judgement, each play explored narrative arcs that felt honest. Individual writers made attempts to grapple with difficult topics from queerphobia to substance abuse. Each play had the potential to trigger necessary conversations.

Adékoluęjo, who was eventually nominated for an Offie Award for Most Promising New Playwright for Teleportation, decided to write after years working as an actor. 'I’m very blessed and thankful to have been given the opportunity to tell different stories. Often when I look deep into the actual story of black characters in popular culture it’s hard to find satisfaction when, more times than not, the characters are filling in plot holes instead of driving the narrative. No shade!' Adékoluęjo wanted characters who represented her, and the people surrounding her, to drive the narratives of the stories she sees onstage: 'to be not just the best friend. But the best friend, the villain and the hero.' 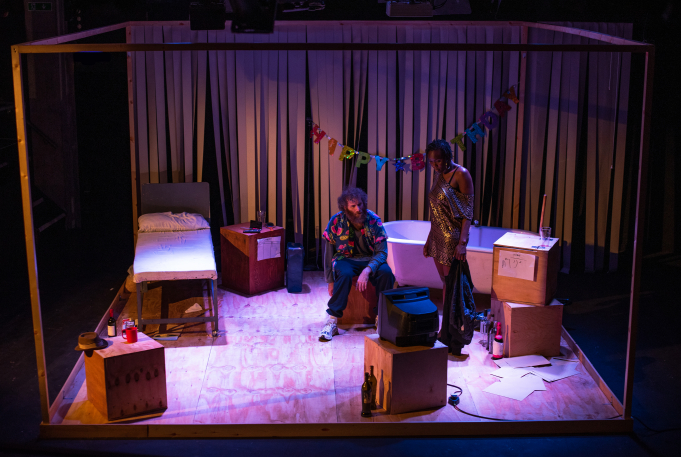 Teleportation explores the possibilities of seemingly mismatched relationships, particularly in a world where racial and generational divides are deeply embedded. 'Racial politics have always been important to me,' Adékoluejo says. 'I think they should be important to everyone.'

While the writers’ intentions shone through, I wonder how much support they had, and whether it was what they expected?

'The Bunker was great', Adeyemi tells me. 'Chris Sonnex (Artistic Director and Co-founder of The Bunker Theatre) has been supportive along the way, reading every draft, providing dramaturgical support, the lot. However, I would also say, there’s still some way to go with festivals like these. It’s important to do these things properly. There were areas where I and my team didn’t feel well supported at all, which is a massive shame because support was one of the promises that made us willing to participate.'

While Adeyemi didn’t go into further detail, one can infer that the process toward his play’s eventual production did not meet his initial expectations. Adeyemi’s play was, last minute, announced as a staged reading, which was a surprise to audiences.'I was completely livid,' he told me. 'When the statement went out, my phone was non-stop and I just wanted to hide away from the world. I didn’t go to the first reading.'

But what seemed a disaster eventually felt like a blessing, as the reception to The Sh*t I Can’t Say To My Dad, surpassed expectations, selling out six of a total eight performances.

'You don’t have to speak for me, because I’m here'

'The love and support I’ve received from friends, family, industry people, strangers… it’s all been a bit overwhelming,' Adeyemi added. 'I had the chance to hear my words performed seven times by three different actors, who all brought something different in such phenomenal ways. The readings were incredible.

'I think the industry spends far too much time telling people to go away and develop themselves, but showing your work to an actual audience is a great part of development.'

For Adékoluęjo, This is Black was an important forum for talking about race. 'They’re saying, come watch these stories by people you don’t know about people you think you know. But you don’t. Black stories in mainstream media have been told through very specific eyes. This Is Black gave us the opportunity to enter space and say: "Hey, you don’t have to speak for me, because I’m here". That is a blessing, and it works.'

Adékoluęjo responded 'The Bunker is a beautiful venue with beautiful people at the helm, but it all happened way too quick! Round two, anyone?'

However, there won't be a round two at the Bunker after the venue announced that it will close in March 2020. The news makes it even more pressing to support venues and artists, to provide showcasing opportunities for underrepresented groups, and to provide alternatives to the flagellation of the gruelling Edinburgh Fringe schedules.

For me, after speaking to Adeyemi and Adékoluęjo, what remains true is that festivals that look to centre and truly support otherwise marginalised artists are still necessary. Such festivals should have goals not to just make space, but to ensure that space is hospitable. They should be truly inclusive of those they claims to represent, and continuously strive to be better. Because that’s what these artists deserve.

Nkenna Akunna is a culture writer and playwright from London who frequently writes about theatre and the African diaspora. She is a Playwriting MFA candidate at Brown University. @nkennaakunna

Blog
How to avoid tokenism