The children from a new documentary about Andy Field’s Lookout project in Beijing remind us that arts participation is crucial in ensuring that all voices can shape our future.

In the wake of a global pandemic, the immediate future feels difficult to predict. What about the future in 30, 60 or 90 years' time? This is what Andy Field asks primary school children in his project Lookout.

Lookout is a one to one performance for an adult audience member and a child performer made in collaboration with local children. The performance takes place high above a cityscape (on a rooftop or in a tall building) and imagines that city’s possible futures. The project has had many lives and each performance is uniquely shaped by the local children who are tasked with describing what might happen beyond the lives of the audience members.

Field and his partner, Beckie Darlington, have taken Lookout across the world, stretching from cities in Austria, Brazil, Canada, China, Egypt, Latvia, New Zealand, Portugal and Spain to the UK. “I've always been fascinated by cities and always wanted to explore cities as a way of exploring the issues that are most fundamental to the world today”, Field explains  “I wanted to create a project that would be a platform for people who don't often have a voice in the city. In this instance that was children."

"I wanted to create a project that would be a platform for people who don't have a voice in the city. In this instance that was children." 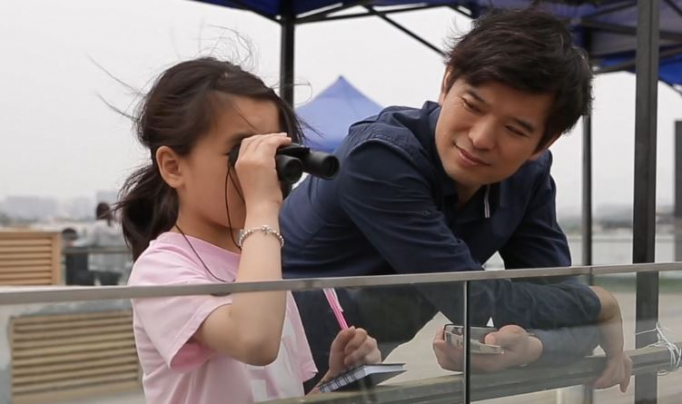 Looking out to a Beijing 90 years in the future.

This latest documentary follows the project as it goes to China and brings in the voices of domestic migrant children, who have temporary resident status in Beijing. "A city like Beijing is having to operate on a scale that is so much bigger than the other cities we've been to", says Field in the Lookout Beijing documentary, "terrifyingly quick progress and change has taken place in China in general and in Beijing in particular."

The documentary follows the project from process to performance – beginning with open-ended exercises where the children are given the space to think and imagine – to the end performance, where they are given the opportunity to have one to one interactions with an adult audience member.

Despite the geographical distance between the children in the different iterations of Lookout, there are several similarities in their hopes for the future. The climate emergency looms large and affordable housing is top of the list for a more comfortable adulthood: "houses were millions of dollars”,  says 10-year-old Francis describing a New Zealand 30 years from now as part of Lookout Auckland “but now they're really cheap, so that's really good."

There are plenty of science fiction tropes: flying cars feature heavily alongside benevolent robots who clear away human litter. There are playful ideas: giant slides that connect skyscrapers, underwater restaurants and treehouses. Issues relevant to particular cities also make headway. For example in Lookout Vancouver, that took place in 2018 – a year of record homelessness in the city, the children want a future with long-stay homeless shelters. In Beijing, eliminating pollution is a hope expressed by several participants.

There is a sense of optimism about the future from residents of all cities Lookout has toured to. This is summed up by 11-year-old Injy, who visualises herself living in Cairo in 2047: "My life is healthier, I can see more trees."

"Having anyone listen to you with that kind of seriousness will change the amount of space you think you're allowed to take up in the world." 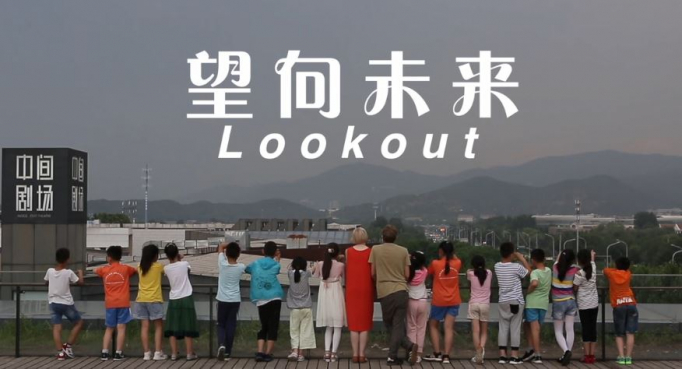 Field and Darlington look out over the city with the performers from Lookout Beijing 2019.

Children have a unique perspective that make their hopes for their city distinctive and valuable. As Field puts it: "They are not burdened by so much realism, by so much practical baggage. Even the most impossible ideas contain perhaps a grain of hope and possibility inside them."

For both Field and Darlington, this is more than an imaginative exercise for the children, the fact that the children's ideas are taken seriously in this format gives otherwise marginalised groups a sense of empowerment. "Having anyone listen to you with that kind of seriousness – taking your ideas seriously, will change the way that you think, change the amount of space you think you're allowed to take up in the world", Field states.

It has become a clichéd phrase to say that the current pandemic moment is unprecedented. However, the uncertainty caused by Covid-19 has reinvigorated the debate about our shared global future and who gets a say in reshaping it. As well as providing a useful case study in creating site-specific performance with local participants, Lookout reminds us that participation in performance is a valid way to give a platform to voices unheard at a political level, and to create a space to imagine different futures.

Lookout is commissioned by The Arches, Glasgow and the Unicorn Theatre. Supported by Arts Council England. Created by Andy Field Music and Sound design by Tom Parkinson Produced by Beckie Darlington Dramaturgy by Sibylle Peters.

The Lookout documentary was created with Inside Out Theatre in Beijing.

> Listen to recordings from Lookout projects across the world

Blog
"Shared stories keep us together"

@UKTheatreDance @thisisliveart are looking for new leadership! https://t.co/gpPJhNZbcW
(1 months ago)

@UKTheatreDance RT @weareunltd: 🎉Today we are delighted to announce £717,490 of funding for 34 #UnlimitedCommissions by disabled artists across the UK, su…
(1 months ago)