'There is an appetite for our stories to be told, and told authentically'

After their award-winning run of BURGERZ, Travis Alabanza passes on a recipe for trans artists touring work 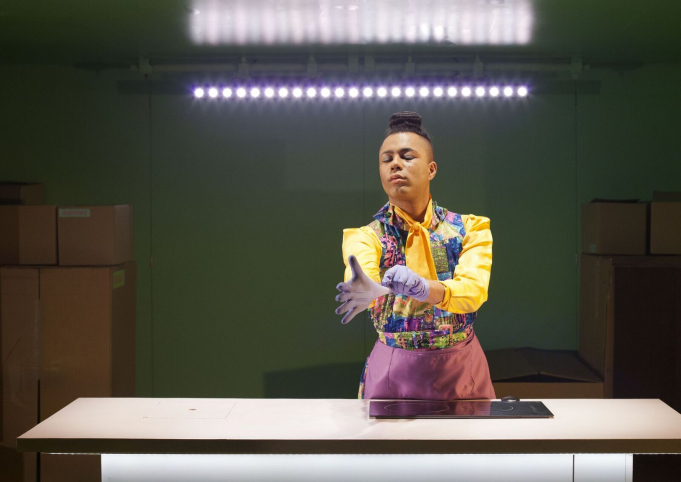 The woman who has volunteered from the audience is in tears. Unsure what to do.
She grabs the burger.
I ask her what she is doing.
She takes a bite.
Cries.
And sits back down.

I throw the burger alone.

The lights go down on Burgerz at the Southbank Centre, the last show of over a year of performing the work in 15 venues across four countries – to large audiences with help from an army of volunteers.

Burgerz is essentially a cooking show. In 2016 a burger was thrown at me in broad daylight as someone shouted a transphobic slur. 100 people saw, but no one did anything. In Burgerz, I make a burger on stage in order to cleanse myself of the attack. In order to do this, I ask for the help of a white cisgender man from the audience every night.

I think I can say this… it was a hit. We sold out 90% of performances, won awards at the Edinburgh Fringe, got some really good reviews, toured internationally and went to some posh venues. I think it had a bit of the buzz. But the blues still hit.

Theatremakers will know that whenever a show closes, post-show blues are inevitable. The feeling of lights going down on adrenaline. A shift in focus. Not knowing what is next. Your body finally realising it can rest. I’ve experienced this before, but when it came to Burgerz, a show that I had written, performed, and dreamed of in collaboration since 2016 – the post-show blues hit with a new kind of weight. Something more akin to post-show agitation.

This was my first experience of writing a show about the very particular politics around harassment, race and transness, in the midst of a growing anti-trans climate in the UK. My identity is involuntarily politicised – especially on stage. So as my run came to an end, I was left with more questions, thoughts and ideas.

'The first time people commented on my legs and what I was wearing over and above the craft of my show, I thought it was a coincidence.'

I wrote an article in The Stage as Burgerz first opened at Hackney Showroom in 2018.  It was about feeling lonely as a Black, trans, working-class artist. In the piece I explained that, although there have been many Black trans performers, the lack of archiving around us creates a feeling of isolation.

I had hoped that after the success of Burgerz, I would feel less lonely in the industry. As I write this a year later, I’m not sure if that is true.

What is true is that I’m armed with more understanding. Understanding about where that feeling of loneliness comes from, and how theatre currently deals with presenting multiple identities on stage. In presenting a show about gender, race, class, whiteness and colonialism I also learnt more about all those things. Every show I invited two audience members who are white cisgender men and women on stage, so I gained insight about how these issues relate to audiences.

There’s so much I could say about what I learnt from Burgerz, but I wanted to start here. With a recipe. A recipe of my experiences to pass on to other touring trans artists. Mainly because I couldn’t find this recipe before I started. I still think it is lonely to be trans in the industry, let alone trans, not white, and not middle-class.

So, as I wash up my apron and clean the last plate of burgerz, I want to share what I’ve learnt. 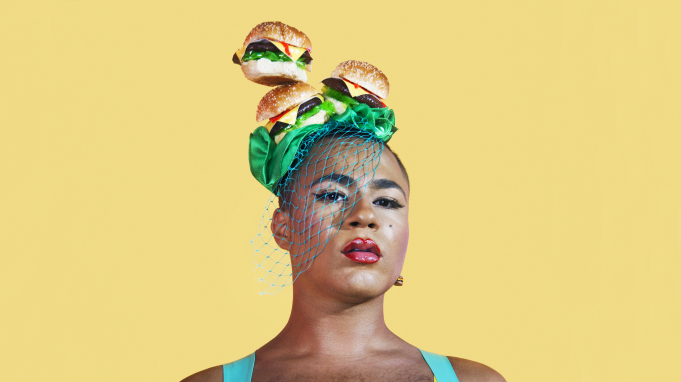 1 tablespoon of making sure the venue has toilets appropriate for you and your audience.

Venues, if you invite a trans artist to present a show, you should also ensure you’re welcoming to the artist and trans audience members. The toilet is a good place to start, but is not the place to finish. I had fab producing help from Hackney Showroom, who ensured toilets were part of the conversation when hiring the work. Requirements are not just about your work on stage!

200 grams of being called everything OTHER than an artist (e.g. an activist, a trans political thinker, a campaigner, a teacher, an educator. But NEVER an artist.)

Add one huge dollop of the word TRANS before every sentence related to your work. You are now always a TRANS theatremaker. Even if it’s already mentioned in the first line of the review, it will be mentioned again. Your show is now pigeonholed as a TRANS show.

1 adult serving of being misgendered in your reviews.

If you’re working with marketing or PR teams, ask them to look out for these things. It is their job to ensure you are being spoken about in a way that is true to your identity. It may feel like more effort, it may feel like you are asking more than the 'usual' artist, but what the hell is usual in the arts anyway? You deserve to read a bad review and be angry at the content, not at being misgendered/dead named.

Resist this with all your energy. This one’s important. You are not the first. Being the first is a myth based on individualism. You are in a community. Research those that came before you and honour them. Read Jo Clifford’s work, see if she will come to your show. See who is doing work at the same time as you. During my run at the Edinburgh Fringe, Emma Frankland’s show Hearty brought me out of a bad day. Find people who have been round the block before you for some words of wisdom. Thank you Selina Thompson, Scottee, Sam Curtis Lindsay and Malik Nashad Sharpe for the wisdom you gave me.

Create a community by channelling Harry Josephine Giles, who set up #TransFringe during the Edinburgh Fringe 2019.

Add to this an indulging drizzle of comparison to other trans artists. Whether similar or not.

Welcome it when it feels healthy. Resist when it feels like a lazy, unhelpful comparison. Avoid the feeling of competition. There can be many of us, and our work will be better because of it. Find the work of non-trans artists that are similar to you too to change the dialogue. Your work is more than your identity.

An unhealthy amount of pre-made assumptions about what your work may or may not be, before it is seen or read.

Your show will be called ‘niche’. It will be called ‘risky’. Audiences will have preconceived ideas about what the work will be about. Even if you sell out 400 seat venues, people may still call you niche.

Work hard to prove them wrong and know that your work and worth exists outside of these assumptions. I’m still figuring out how to combat this one.

A possible pinch of online attacks, hecklers and in person protests about your work and its subject matter.

This isn’t here to scare you. But I did experience this – from people who hadn’t seen Burgerz, from people who have devoted a lot of time to being anti-trans, from people who called their protests feminist. And I want people to know. Online and in person hate crime against trans people rose by 81% the same year I made this show about trans violence. It was scary. And it hurt.

Build your own safety into the requirements for your work. If you need taxis home, put it in your funding. Ask the venue about their procedures. Remember the work is also you, and your safety matters.

During my run, transphobia showed itself in more subtle ways too. The first time people commented on my legs and what I was wearing over and above the craft of my show, I thought it was a coincidence. The fifth time I realised that it was a form of transmisogyny. Take notes. Find friends to process with. Take it in and learn when you can. Reject it when you are exhausted.

A surprising amount of people supporting you in the best possible way.

Seeing trans people at your shows will never not warm you. Remember, that although an audience comes with expectations, it’s partly our job to confront them. Your audiences will surprise you too if you allow them.

I feel so lucky to have experienced this show, to have performed it and toured it extensively. I will also be taking the show to Brazil at the Mostra Internacional de Teatro de São Paulo from 13–15 March 2020 with support from the British Council.

I’ve seen a huge response of different intense emotions from audiences and volunteers. I’ve learnt more about the world and myself. I’ve had support from venues, loving directors, producers, and a gorgeous team. Although I still have many questions, there’s one thing I am very sure of: there is an appetite for our stories to be told, and told authentically. Whether the industry decides to reflect that appetite in their programming is unknown. But I hope that you continue to tell the story you want to be heard.

I want so many more trans artists of colour to be on stage at festivals and in theatres. I want the power to shift – the only thing stopping us should be our choice to say no.

Travis Alabanza is a performer, writer and theatremaker. BURGERZ, presented by Hackney Showroom, formed part of the British Council's Edinburgh Showcase 2019 and will tour to the Mostra Internacional de Teatro de São Paulo in Brazil with support from the British Council.

Blog
Whose voices are valuable?

Blog
Round up: Get ready for Edinburgh Showcase 2019

Blog
"It's a question of being visible"

Blog
'You don't have to speak for me because I'm here'

@UKTheatreDance Andrew Miller: Disabled representation in the arts should be a funding priority https://t.co/4lS2R40xiZ
(1 days ago)