Since appearing in Edinburgh Showcase 2015, Kaleider has taken The Money – an inventive production which is part show, part game – to China, Italy and the USA. As he prepares to live stream performances from Australia, Seth Honnor tells us about his experiences playing with different cultures

Can you introduce us to Kaleider?

At Kaleider, we bring together people in the creative industries – artists and technologists with academics and scientists – and we make fun, interesting art that will engage the public. And we hold our gaze on some really big challenges in the world as well, like the challenges of climate change, peaking oil, or ongoing fiscal crisis, such as The Money is concerned with.

“Someone told me that it’s a bit like watching Shakespeare”

What can you tell us about The Money?

The Money is a kind of show-game hybrid. When you buy a ticket, you can choose to be a Benefactor or a Silent Witness. The Benefactors are given a set amount of time to come to a unanimous decision about how to spend the money that’s on the table.  If they decide in time, they get to take it away and spend it. If they don’t, then it rolls over to the next show. The Silent Witnesses can buy their way in at any point and become a Benefactor with the others. So they can change the action right up until the last seconds on the clock.

It can be hilarious. It can be really fun. It can be beautifully poetic. It can be excruciating. Someone told me that it’s a bit like watching Shakespeare. There aren’t any plants or performers in there – it’s all real people playing a game. And yet characters rise and fall, leaders come and go, and suddenly someone who’s been very quiet for a long time becomes very central to the action. It can be very exciting, and it can be quite quiet. And it tends to be an extraordinary experience.

“The question is: how is this going to work in a different country?” 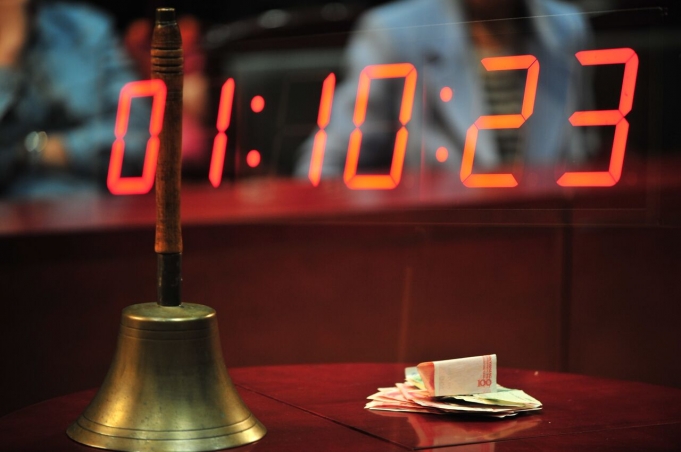 How did you prepare to take The Money to Edinburgh Showcase?

We’re very lucky with this show because we take it to civic decision-making spaces. We’ve been to some of the most glorious spaces. We’ve done it in the Houses of Parliament in the UK and in Edinburgh we did it in the City Chambers, which I don’t think anyone has ever used as a venue for Edinburgh before. We loved performing it there; it’s one of our favourite spaces.

In terms of preparing it for international delegates at the Edinburgh Showcase – often the question is: how is this going to work in a different country? So we had to prepare a format we could tell international promoters about that would work in different languages. We decided we’d put a translator into the show to translate for the two performers who oversee the game. The translator would have a costume and an earpiece. So everyone speaks in their native languages, and it all works very well.

We had a really great response from international delegates. I think The Money has an audacity in its simplicity, and people really respond to that. And because money is a universal thing, it translates across different cultures very quickly and easily. So people go, “I’d love to see this in China” or “I’d love to see this in Australia with lots of Australians playing it.”

“Everywhere we perform has a very specific cultural resonance”

Which countries have you toured to?

Since Edinburgh, we’ve taken The Money to China, America and Italy, and we’re going to Australia for a month in October.

Everywhere we perform has a very specific cultural resonance. In America we performed in the Quinnipiack Club as part of the International Festival of Arts and Ideas. It’s at Yale University and it used to be a men’s club, and actually the first woman who became a member of the club is the founder of the festival. So we were in this extraordinary wooden panelled room in Newhaven, Connecticut.

In China, we were in the Grand Theatre in Tianjin. We don’t normally perform in theatres, but we did this once because it was China. It’s extraordinary, we were in the multi-functional hall of this state-built glass modern building.

And then in Italy, we were in quite a small civic space in the mountains, as part of the Pergine Spettacolo Aperto Festival which is just south of the Alps, and it was brilliant. It even had a European Union flag in the room – which touched a nerve for us, because it was two weeks after the UK voted to exit the EU.

In Australia we’re going to the Melbourne Festival. We’re doing 27 shows which is an enormous amount of games of The Money, compared to anything else we’ve done. We’re doing it in two different town halls – I understand they were built on the Gold Rush and have an amazing history. And then, quite extraordinarily, we’re doing it in Victoria Parliament, which looks much like our Parliament in the UK. It’s always brilliant when we go into those kinds of spaces, because they add such huge weight to the experience for the audience.

“In China, people who came to play pushed at the very edges of the rules” 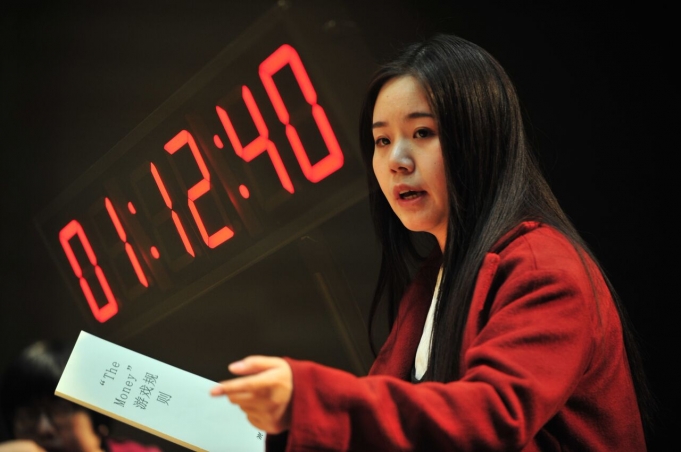 The Moderator at The Money in China. Photograph: Propel

Have you seen differences in how people in different countries play the game?

To an extent, the show plays out as it does everywhere we go. But there were some differences. In Italy, there was a moment where I had a giggle to myself because every single person sitting round the table was talking at once. I think I heard that it also happened in Hull. But I’d never seen it happen before.

In China, people who came to play it really gamed it, more than anywhere else we’ve ever played it. They really pushed at the very edges of the rules, and it was really fun and quite challenging for us to hold it. In one show, someone came in and took on a character and acted it all the way through right until the end. We only found out after the show that they’d been performing this slightly provocative character.

We made the biggest change to the rules we’ve ever made in America because we found the American Benefactors were just talking about charity and weren’t critiquing it. So we changed the rules to make it more playful, and it worked. Also, it’s very rare that people take notes in The Money but in America, every single show, someone took notes.

But it’s very easy to fall into the trap of reading an entire country’s culture off of watching a few games of The Money. One’s stereotype of a culture comes to the fore very quickly. And it may not have been that country; it may have been that city. Or it may just be coincidence. But I’m very much looking forward to going to Australia, because the Australians that we’ve had playing it before bring a brilliant antipodean energy to it.

“The outcomes of Edinburgh Showcase have been numerous, more than just international touring”

Looking back, what did you get out of being in the Edinburgh Showcase?

It was amazing being in Edinburgh with that show because there was so much interest in it. It wasn’t hugely demanding to put on the road. It was a privilege to have a show that people are so excited about. The outcomes of it have been numerous, and more than just international touring. We turn down quite a lot of gigs because we don’t have the capacity to deliver them, so we’re very lucky that we choose the ones that we want to do. And it ratcheted up our conversations with television, because some American TV producers saw it in Edinburgh, which meant that the conversations we were already having in this country stepped up a notch.

Seth Honnor is Artistic Director of Kaleider. He was talking to Cathy Gomez, our web editor.

> Watch a live stream of The Money. Some performances at the Melbourne Festival in October will be streamed. Details on Kaleider’s Facebook page.

> Check out Listening Trees, another Kaleider project co-produced with Mercurial Wrestler. It enables people sitting in public spaces to have conversations with each other across cities or countries.

> Read an interview with the people who make Edinburgh Showcase happen

> Watch our film about Edinburgh Showcase 2015, with journalist Matt Trueman interviewing Kaleider alongside other companies performing at the Edinburgh Fringe