Making a new future at the Holland Festival 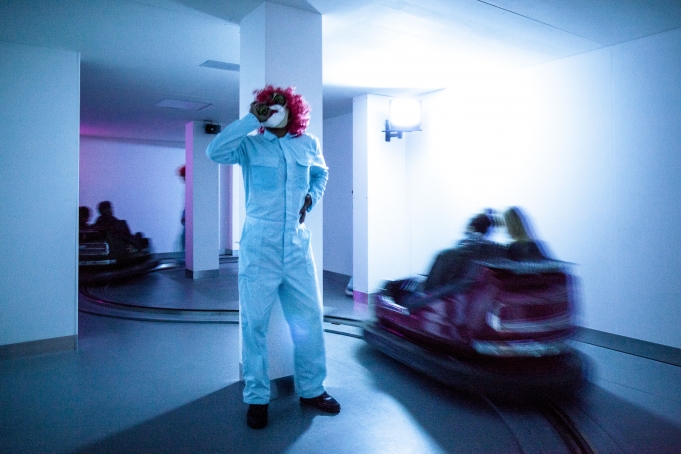 It's often the case that scientists, working entirely independently from each other in different laboratories in different parts of the world, pursue almost identical hypotheses. So it is in the theatre. Although in theatre's case, while the hypotheses may be similar, the experiments conducted may be very different and the outcomes entirely unalike.

One of the pleasures of a festival is the way individual pieces of work run up against each other in unexpected ways, allowing you to see unforeseen connections. Who would have thought that Vincent Macaigne's En Manque and Ivo van Hove's Obsession might have anything in common? But seen on consecutive nights they very much appear to do so. It's also fascinating to see how distinctive and original work becomes all the richer when viewed through the prism of shows seen elsewhere in a different country.

Dries Verhoeven's Phobiarama at the Holland Festival is a bit like Punchdrunk's It Felt Like a Kiss. It's a little like Marisa Carnesky's Ghost Train. It also has a touch of Jamal Harewood's The Privileged about it. Like Punchdrunk's house of horrors show, it draws on the ideas developed by Adam Curtis and others about how keeping citizens in a high state of anxiety increases the control of governments. Like Ghost Train, it uses the fairground ride as a metaphor as it places us, two at a time, in a fairground car and sends us on a dizzying circuit around a space of endless doors and shadowy corridors where danger might lurk. Like The Privileged, there is an extraordinary moment when bear suits are removed and we can see the vulnerable black body beneath.

It might be like a lot of other shows, but there is never a moment when Phobiarama feels derivative. It occasionally feels as if it lacks a depth and density as we lurch around the rails being menaced by bears while snippets of speeches are relayed via video monitors – there are only so many bears you need to see. And the idea that clowns are scary is a tad old hat, although the way they are employed is no laughing matter.

But gradually Phobiarama deepens and offers an increasingly piercing comment on the way we play into the hands of those intent on exploiting our fear, as the ride suddenly hurtles backwards and perceptions and certainties are undercut. Verhoeven has always used public spaces to explore the psychic geography of contemporary life. This "living installation" puts the audience on the spot by demonstrating how easily our own thinking falls prey to manipulation from both the left and the right. The speeches of Donald Trump and Geert Wilders rub up against those of environmental campaigners predicting catastrophe.

It's terrifying how easily, from the apparent safety of our fairground ride, we start to "other" those who are not on the ride. In that sense, it reminds me of Deborah Pearson's Made Visible which dismantles white privilege. It's clever too in the way that, like a bear, it comes back for more. Just when you congratulate yourself on having seen through the the rhetoric and the ruse, it sets it up all over again and you fall for it again. Fiendishly clever stuff.

Phobiarama is exactly the kind of work that thrives in a festival context. It speaks directly to how we live now, as does Vincent Macaigne's En Manque. If Verhoeven explores the social structures that make us act in certain ways, Macaigne's piece looks at the spiritual emptiness and the deep malaise that affects personal relationships and in turn infects our wider relationship with the world. Or maybe it's the other way around. Whichever, it is paralysing.

It initially begins as if it is a satire on a particular kind of arts philanthropy, which appears generous but which is deeply egotistical, and on Western art itself. However, it develops into a show that suggests a culture in ruins as the stage becomes trashed. Individual histories – a woman suffering from melancholia; her daughter who is offering to kill her – are woven into a scenario where the protagonists are reduced to the living dead haunting a desolate landscape. It's like a very disturbing but oddly ugly-beautiful dream. Both absurd and terrifying. One that, as the smoke clears, the water fills the stage and the flames die, reminds us that sometimes you have to destroy in order to see clearly and make a new future.

"Promised Ends is spliced with references to King Lear to offer a riff on madness." 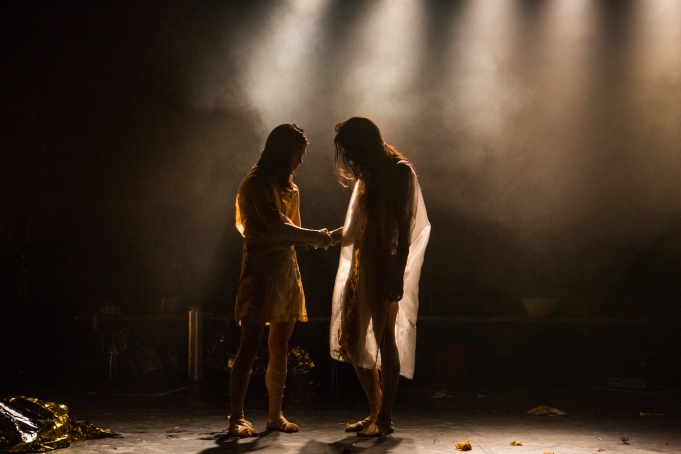 If Phobiarama and En Manque look to the future, Derrick Ryan Claude Mitchell's Promised Ends: the Slow Arrow of Sorrow and Madness seems intent on looking backwards both in terms of form and subject. Mitchell returns to one of his favourite stories: the Donner-Reed Party, a wagon-train group heading for California in the mid-19th century that becomes snowbound in the Sierra Nevada and resorts to cannibalism to survive. Mitchell splices it with references to King Lear to offer a riff on madness.

There are moments of beauty and, like King Lear, of utter cruelty too – not least the way a disabled cast member is used and abandoned – but too often Promised Ends simply proves that nothing will come of nothing however much it is dressed up with light installations, rituals and live music.

"Obsession shows the gap between our behaviours and our deepest desires"

Expectation can be a killer in the theatre. Too much and you are inevitably disappointed. Too little and you decide to give the show a wide berth. I almost did that with Ivo van Hove's Obsession – which I missed at the Barbican in London. I've felt passionate about too much of van Hove's work, particularly The Roman Tragedies and Kings of War, to want to be disappointed by his work. But I would have been wrong. Maybe the show has simply settled? But there is infinitely more to enjoy than many of the British reviews might suggest.

Their tendency to see the piece through the prism of Luchino Visconti's 1943 neorealist movie and James M. Cain's The Postman Always Rings Twice is misleading. This assumes the obsession of the title is merely the sexual obsession that Jude Law's Gino and Halina Reijn's Hannah have for each other.

Like En Manque it points to the gap between our behaviours and our deepest desires, the ones that drive us towards fulfilment or destruction and that we often don't even understand ourselves. If I hadn't seen the shows separately I would have noticed their differences. Seeing them in a festival allowed me to spot their similarities.

Lyn Gardner is Theatre Critic for The Guardian, Associate Editor of The Stage and an author of children’s books. @lyngardner