“Deafblind people are the least integrated into society”

In Touch – a new inclusive play from Russia created with Graeae’s Jenny Sealey – lands at the National Theatre on 14 October. Producer Viktoria Avdeeva tells us how her work with deafblind actors has challenged perceptions and changed lives 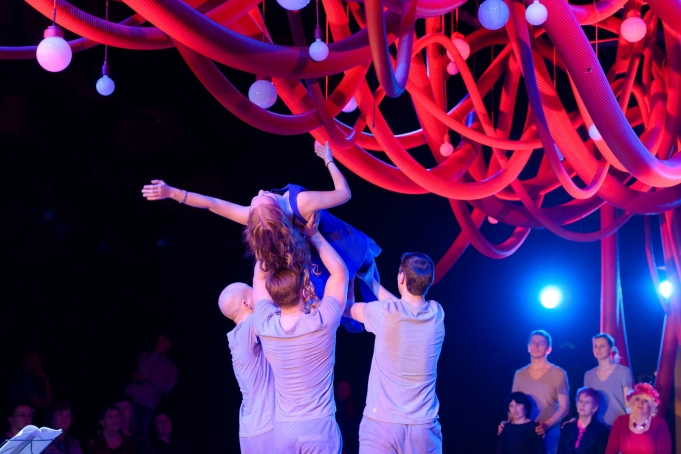 In Touch is a play about communicating beyond boundaries and stereotypes. It is part of a cultural and social project with deafblind people in Russia and the UK. It's based on real stories which deafblind, hearing and sighted people share together on stage. These are all stories that inspire – inspire us to see life differently, to value and live the moment. They are told by actors in four different languages: Russian and English spoken, and Russian and British sign languages.

For instance, Raji was born in India, and after she became deafblind her parents moved to the UK to find better education and care for their daughter. Her story is about finding inspiration and joy in every moment in spite of the difficulties with space and social life that come from being deafblind. All her life is the story of overcoming language, cultural and sensory barriers and differences and reaching the highest state of harmony with herself and the world.

Alexey was a factory worker three years ago and had not even thought about theatre and arts. He tries to be independent in everyday life, in spite of progressing Usher syndrome, which means he sees the world as if through a tunnel 3mm wide. His story of getting to work by metro and bus, which is a usual process we never think about, is a story of survival every day – a real adventure in the city jungle.

When Alexey started working with us, he opened incredible artistic reserves in himself. He was fired from his day job because of his commitment to our rehearsals. But now he is the lead actor in three plays – including Carmen at the Hermitage Theatre in St Petersburg and In Touch, which he has performed for two years on leading stages in Russia, now London and soon in Paris.

There is also the story of Alexander, who was born Deaf and became a professional artist. After losing his eyesight he didn't fall into despair, but found an outcome for his creative energy in sculpture.

Inclusive theatre is just appearing in Russia and becoming visible little by little. Our project started with Touch-Ables, the first version of In Touch in 2015. We wanted to tell society about the existence of deafblind people. We faced a lot of difficulties promoting it as a theatre play, not just a social project. Our audiences had a perception that inclusive or disabled theatre is always about pity and rarely of artistic value.

Graeae's Jenny Sealey is Associate Director of In Touch. Watch her introduce this unique production

Touch-Ables was the first inclusive project in the country that attracted a lot of public attention, was hosted by many theatres and seen by different audiences. It changed the general attitude to inclusive theatre. Now there are more inclusive shows, and some of them are really good. Deafblind people in Russia have become more visible, inclusive theatre has become more respected and professional, and our deafblind participants have become actors.

In Touch is a play for a wide audience and it is accessible for D/deaf, blind and deafblind spectators. The main goal is to bring together people who see and hear the world differently, who might have different stereotypes about each other but who find that it is great to be together. It is easy to communicate if our hearts are open.

It is an interesting play artistically speaking, because for this group of actors the co-directors found a theatrical language that shows subtle nuances of interaction and expression. We worked with Graeae’s Jenny Sealey as Associate Director, who is known for her artistic synergy of different languages and sign languages. Thanks to her involvement in In Touch, deafblind actors started to speak for themselves in their language, and we introduced more physical than verbal theatre.

The National Theatre has given us a great example of perfect organisation, devotion to what they do, and most importantly their accessibility. I think Russian theatres must learn from them how to respect all people with any abilities, how to love and take care of their audience.

"It never leaves the audiences indifferent. Some people say it has changed their lives." 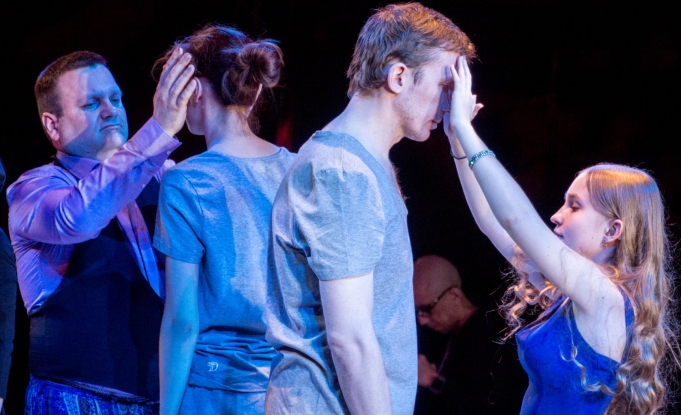 In the UK there are much more social and cultural opportunities for people with disabilities, but what is common with Russia is that deafblind people are the least visible and integrated into society. With In Touch, we would like to encourage theatres in the UK to involve more deafblind people in productions and training. We want to share the message that there are people with different perceptions of the world, people who communicate in different languages, but we have a lot in common, and all can understand each other if we open our hearts and minds.

The show has become a big event in Russia. It never leaves the audience indifferent. Some people say it has changed their lives, some say they began to notice blind and deafblind people in the metro and they are not afraid to come and help if needed. I hope and believe that the play will inspire them.

Viktoria Avdeeva is Producer of In Touch and Creative Director at Inclusion Theatre Company, a centre for the development of inclusive theatre in Russia. She was talking to Cathy Gomez, our Web Editor.

In Touch is at the National Theatre on 14 October. It is part of a longterm project partnered by the British Council.

> See the show at the National Theatre

> Discover the Touch-Ables programme in Russia

> Read a blog about Graeae's work on On Touch

Blog
"My Deafness is my ability"