Techno-fantasy, ecological terrors and political satire. Forest Fringe’s Andy Field takes us through Imagine 2037, a festival of imagined performances on a hilltop in Edinburgh 20 years from now – which launches on 19 August in Edinburgh and online 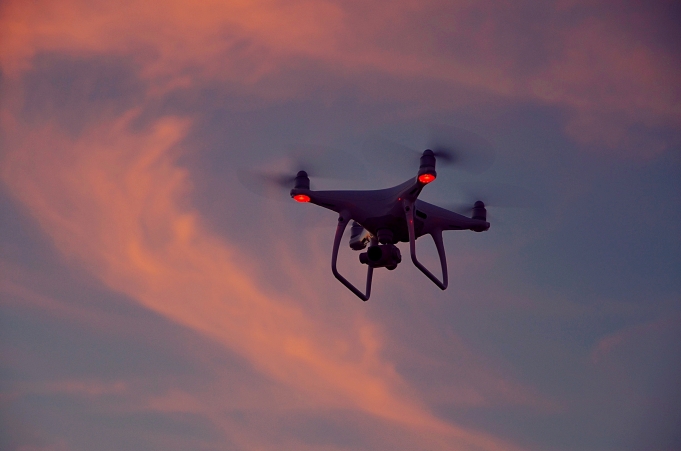 Will drones fly above Edinburgh in 2037? Photograph: Robra shotography

As you read these words I'd like you to imagine my voice speaking them to you. An English voice, unremarkable and undistinguished. The kind of voice you probably already know the sound of. I am sitting in my living room in London. It is Tuesday 18 July and the clock on my computer says it is 18:31. In the background I can hear the gentle thrum of the washing machine in the other room, traffic from the main road outside and the skittering tip-tap of my own fingers on the keys of the computer.

However, by the time you read this, none of this will any longer be true. I will not be there or if I am the sounds will have changed, and so will I. Perhaps it is only days later, perhaps many years have passed.

Here we are then, separated not only by distance but also by time, by days and miles. Held together only by the thin of thread words on the screen in front of you and the imagined sound of my voice – a poor stand-in for flesh and blood, you think. For your body and my body sharing some space together.

And yet there's something so intimate isn't there, about the sound of my voice? The way it slips in through your eyes and twists itself into your thoughts. I'm able to say much more than I would if I was simply standing in front of you. It feels to me both comforting and thrilling to be speaking to you from the inside of your head. Who's to say this virtual version of myself is worth less to you than the real thing?

Several years ago I was invited to perform in Nassim Soleimanpour's White Rabbit Red Rabbit at the Edinburgh Festival Fringe, a quietly fierce show in which a different guest performer stands in for Nassim at each performance. Through the borrowed voices of his guest performers, Nassim too summoned a bolder, wilder version of himself. A version that toured the world without ever leaving home.

There's an important difference between the imaginary world of White Rabbit Red Rabbit and the fictions of conventional storytelling or drama. Nassim does not ask us to imagine ourselves anywhere other than the place we are in. Instead, what he conducts is closer to a summoning. He speaks through the guest performers and with them, and in doing so he becomes present. A real person haunting the intangible, ephemeral space between the words I read on the page and the audience’s imagination.

It is in this same intangible space that I hope Imagine 2037 will exist. Imagine 2037 is a festival of imaginary performances that celebrates 20 years of the British Council’s Edinburgh Showcase at the Edinburgh Festivals. It invites eight artists to each create a performance that they imagine taking place on a hilltop in the centre of Edinburgh 20 years from now in the year 2037.

"The creators are all artists who are immigrants"

The creators of this constellation of imagined performances (and possible futures), are all artists who are immigrants, who live in a country other than that which they were born and whose voices thus have a particular resonance when considering questions of change, uncertainty and the future.

Making this imaginary festival has enabled us to do two things that we couldn’t have otherwise done, one perhaps more implausible than the other.

The first is to bring artists from across the world to work alongside one another in virtual proximity: disparate people with wildly different stories held together by a thin thread, inhabiting a shared space, able to dream together.

Through these eight artists the festival brings together traces of countries as varied as Palestine, Syria, Cambodia, Canada, Mexico, Poland, Pakistan, Brazil, Nigeria, Iraq, Australia, Sweden, the US and the UK. In most cases these artists’ experiences are not defined by a simple journey from one place to another but by a more fundamental transience – lives lived in the shifting eddies of the 21st century. 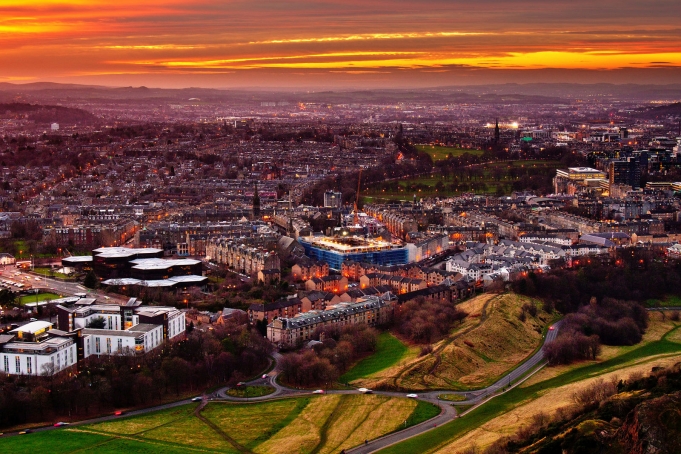 Edinburgh today. What will have changed 20 years from now? Photograph: Ondřej Bockschneider

Artists such as the choreographer Farah Saleh, who was first introduced to dance at the Yarmouk Refugee Camp in Syria where she was born, who continued to dance in Palestine and Italy and does so now from her current home in the city of Edinburgh itself. Or performance artist Joshinder Chagger who has lived in India, Nigeria, Australia and Pakistan but who doesn’t identify with any one of those places as ‘home’, and for whom “each major move felt like a death; a new life and a chance to do it all again”.

Or Gaël Le Cornec, a writer, performer and theatre director who was born in the Amazon in Brazil, graduated in Biology from the University of São Paulo but then studied theatre in Poland and the US before arriving in the UK 12 years ago. Perhaps there is something about the illusiveness of a festival of the imaginary that lends itself to these undefinable experiences, journeys without cultural precedent in search of a vocabulary through which to speak.

But this is not, or not only, a festival about geography. It is also a festival about time. A festival that allows us to collectively project ourselves into an imagined future, summoning hopes and, more frequently, fears for what may lie ahead.

"The artists have employed a dizzying range of genres and forms"

To do so the artists involved have employed a dizzying range of genres and forms. There is techno-fantasy and ecological terrors, political satire, intimate correspondence, and rituals old and new. In some pieces we are asked to imagine the hilltop crowded with people, such as the chorus of radiant female figures moving to the staccato rhythms of Anida Ali Yoeu’s short repeating phrases, or the Yazidi mothers that gather in Anmar Taha’s tender piece. In other pieces it is we, the reader, who become the imagined performer – such as in Maru Rojas’s actions for transitioning to a degrowth world.

Through this forest of possible futures, certain themes nevertheless emerge. Foremost among them, the image of the city – or perhaps more specifically the Western city – at the moment of its disappearance; lost in a fog of drones, strategically rewilded or reclaimed by the ghosts of its past.

In J.R. Carpenter’s New Water Town the old city has disappeared under rising sea waters, with the residents of a new tent city on the slopes of Arthur’s Seat and Calton Hill calling out to each other memories of the things they miss. Whilst in Brooke Robinson’s The Telescope, the audience are entertained by a comedian whilst they await the demolition of the whole of the old town beneath them. Moments of loss. Moments of erasure. An ideology on the brink of its obsolescence.

"A city is always made more of stories than of buildings"

Does the act of imagining a city transformed have the power to transform that city? Each of these pieces enacts its own kind of transformation on the real city below it, and in doing so will hopefully leave its mark on the city, even if only in the imagination of those that encounter it. A city is always made more of stories than of buildings. It is constructed from names, memories and histories, shared space and common knowledge. It lives most fully in flesh and bones and not in bricks and mortar.

You do not need to be architect or a politician to have the power to change the meanings of places. The images we create in our minds cling to the places they refer to, they bleed into the fabric of that place like the memory of heartbreak or trauma, staining it different colours - making it warmer or colder, brighter or darker, more full or more empty.

And just as the versions of myself I imagine in words are frequently more fabulous than anything I can manage in reality, so too our ability to transform the world around us is much more profound and ecstatic when it occurs in people's heads rather than on the streets. Out there we’re compromised by logistics and practicalities; in here we can summon floods and demolitions, spectacular drone displays and choruses of impossible scale and colour.

And perhaps as time goes on, the neat distinction between the real and the imaginary itself begins to fade, like a story about your childhood you've been told so many times that it begins to feel like a memory, or a conversation that you might only have dreamt you had. Perhaps in 20 years’ time, you will no longer remember where you heard these words, but only the unremarkable English voice that spoke them, and the stories you were told of future cities entirely of your own imagining.

Andy Field is a theatremaker, curator, writer and Co-Director of the performance collective Forest Fringe. He is a consultant and co-curator for Imagine 2037. Parts of this article were adapted from a talk he gave in 2015 as part of Junctures: UK Iran Cultural Exchange, produced by 30 Bird Productions in partnership with the British Council. @andytfield

Imagine 2037 launches on 19 August. Look for the limited edition cards in venues during the Edinburgh Festivals or follow us on Twitter to see the work online. #Imagine2037

> See our UK-Iran imaginary festival, which brought together British and Iranian artists

@UKTheatreDance "We’re bringing together examples from around the world of new ways to collaborate, commission and create – ways th… https://t.co/nSvPPkk5PX
(1 months ago)

@UKTheatreDance Job opportunity! Could you be @YourOldChina's next Executive Director? https://t.co/uck4iVjlMU
(1 months ago)