'Theatre is a place that you go to with your squad'

Ngaio Anyia, one of our blogger bursary winners, looks back at her experience visiting last year's Lagos Theatre Festival and asks: what can UK theatre learn from Nigeria? 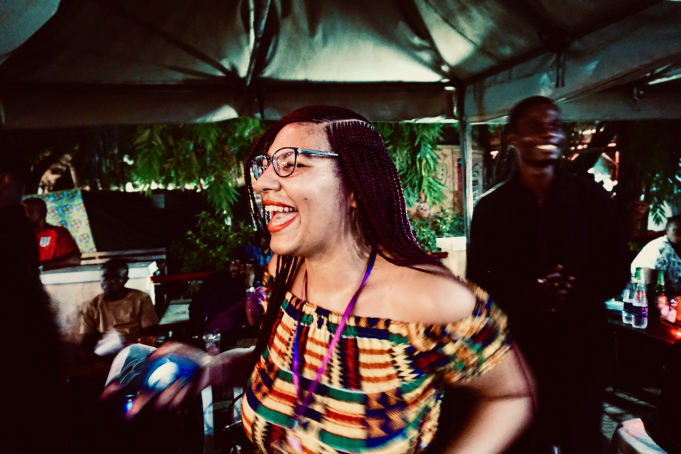 Stepping into the heat of Lagos airport, I breathed in all the smells of a new country and heat washed over me – it hadn’t rained here in days. I had waited my whole life to return to Lagos and 20 years of anticipation weighed heavy.

As a half Nigerian I had been anxious to visit Nigeria for the first time to find out a bit more about who I am and where I come from. The perfect opportunity arose when I was awarded an International Bursary for Bloggers by the British Council to attend the Lagos Theatre Festival (LTF) in February/March 2020 – with a pandemic hot on my heels.

I didn’t know what to expect from the LTF. A more relaxed approach to performing arts festivals than the UK, for sure, but other than that I was blind.

It’s not an outlandish comment to say that the UK’s theatre scene is largely a monoculture. Things are gradually changing, but there are still huge gaps in accessibility for those coming from diverse backgrounds. Like most industries, it’s difficult to get a foot in the door without a connection, and harder still to keep it there if you’re unable to work cheaply or for free. This removes it as a viable workplace for those from lower socioeconomic backgrounds.

The theatre industry in Lagos – after chronic public underfunding – is currently being built back up from scratch. The rebuild gives serious consideration into who theatre is for and how to make it an environment that everyone feels comfortable in. The result is a social gathering for multiple groups – a place where you can go to meet friends and get involved in the productions. The whole layout of the festival encourages social interaction from beginning to end, and, to quote one of the organisers, 'theatre is a place that you go to with your squad.'

The main hub of the festival sits in Freedom Park, a historical site in the centre of Lagos where wildlife weaves between the headstones of prominent Nigerian figures, giving you a glimpse of the country's history as you dash between shows. The area is overflowing with excitement, activity, food, drink, flyers and laughter.

The vibe is created offstage with Ankara fabrics lining the pathways and a constant soft drumming in the background. A gaming area is set up with traditional games like Ayo and drafts. On entry, a traditional main stage lies on the right and a smaller makeshift stage takes over a children’s playground to the left. I saw actors running over the climbing frame and incorporating this novel prop into their created stage.

Two large buildings hemming in a courtyard held more shows, leading to a mini marketplace with yet another two stages. Past a pond, a beautiful natural amphitheatre played host to an opera. My programme was littered with scribbles as I tried to cover as much ground as humanly possible.

The whole event is geared towards relaxed viewing. You can enter a play halfway through – food and drink in hand – and not one eye would fall on you. The comparison between Nigerian and UK audiences seemed stark to me. In Lagos, I was encouraged to make noise, interact with the actors and the audience, and make my reaction visible so the performers could feed off the atmosphere. In the UK I’ve been trained to sit and watch silently, taking mental notes to discuss once outside and out of earshot. But here, any reaction was valid. It took me a moment to adapt.

'It was not a viewing, but an engaged, open, interactive, collaborative experience' 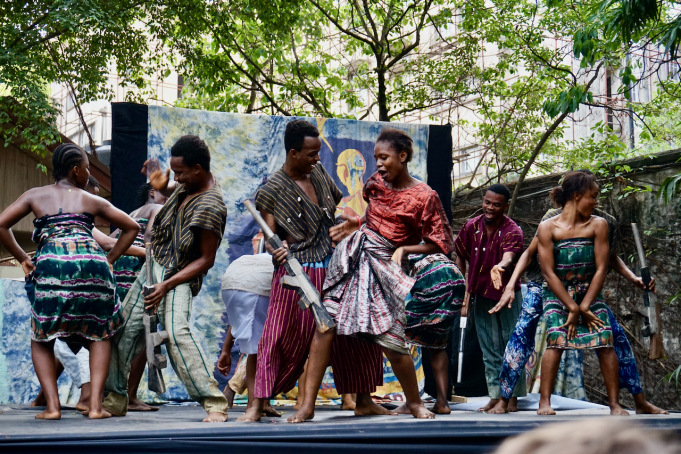 My first play was Jollof Court, a hilarious comedy about a Nigerian wife-to-be and a Ghanian husband-to-be who take each other to court over who provides the jollof. The audience interacted with the actors and each other. I went from being scared to rustle my bag, to openly talking to my neighbour about the superiority of Nigerian jollof.

In the UK we call this ‘relaxed viewing’ but that implies a lack of energy – we need to reframe it in our minds because there was nothing relaxed about it. It was not a viewing, but an engaged, open, interactive, collaborative experience which drew everyone in and connected them. When the performance ended, the fun continued – with open mic sessions, karaoke and live bands. Ticket prices were also reasonable – there was always something for everyone.

Over the past decade whilst working for media companies, festivals and theatre companies in the UK, inclusion and diversity has been at the forefront of my thinking, both personally and professionally. Why are arts spaces predominantly occupied by the white, middle class? When I present this question to organisers, I'm often met with responses along the lines of ‘those are just the people that buy the tickets’,  ‘anyone’s welcome, they just don’t seem to come’, or ‘we specifically put on a series of *insert marginalised group here* plays but there wasn’t much interest so we had to pull them.’

The Black Lives Matter movement has led to UK theatres making pledges to diversify their staff, to bring in more diverse productions and to do greater levels of outreach to various communities, but the culture itself needs a huge shift in order to become more inclusive.

I’ve loved the theatre since I was a child – anything and everything where I can watch a story being told with imagination, creativity and skill at its heart. The excitement of knowing something unpredictable could happen at any moment and that no two shows are the same. Yet as I got older, theatre excited me less. The idea of a theatre trip was accompanied by a feeling of discomfort.

Even now, if I visualise the theatre before a trip, I see a grand building with velvet seats full of eyes that glare over at the slightest sounds. I think of the awkward exchanges that occur when finding your seat if you arrive late and the overpriced drink you have to finish before entering. It makes me flinch thinking of how much effort it takes to shrink into the muted demeanour and tiny seats for the privilege of watching a play told through those that look and sound nothing like me.

In the UK, the production I enjoyed most in the last few years was The Barber Shop Chronicles. During my time at LTF I understood why it had resonated with me so much – it was that same ethos. Watching The Barber Shop Chronicles, I was brought up on stage to dance with the cast to afrobeats and UK funky music onstage at the Bristol Old Vic – something  I never thought I’d do!

The cast members at LTF similarly encouraged the audience to dance in their seats and crack jokes from the beginning – and this enjoyment ran throughout the show. There was no sense of airs or graces, no intimidating stage and forcefed silence, you were left to experience each play in the way that felt best for you. The stories themselves presented multifaceted sides of Nigerian culture. Certainly from my perspective it seemed like there were people from all walks of life there. 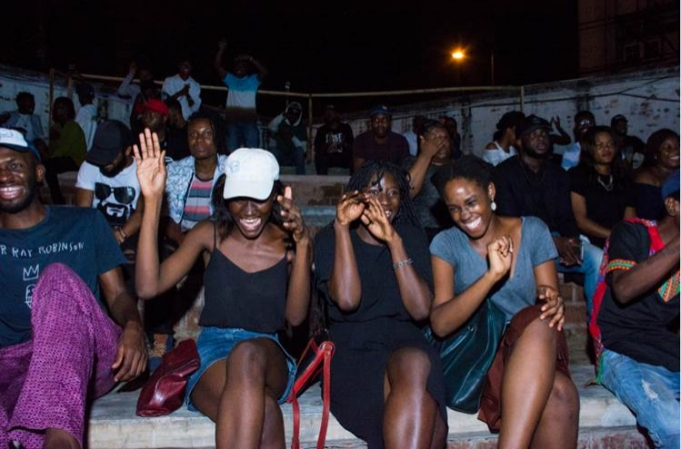 Audiences at the Lagos Theatre Festival are encouraged to interact and be active members of the performance. Photo: British Council.

There is a lot the UK can learn from Lagos, especially now, as the industry is considering how to build back after the Covid-19 crisis. This is a time of extreme change and theatres need to think creatively. LTF has clearly shown that by having an inclusive vision from the very start, collaborating with new voices and reflecting each year on where the gaps are and how they can be filled, that theatre can be – and more importantly should be – for everyone.

Lagos Theatre Festival 2021 went digital for the first time, with performances publicly available online. The theme was 'Reckless Art' and the programme showcases art that responds to the post-pandemic environment with innovation and creativity. In order to remove the invisible barriers that seem to filter in a polite and white class to theatres, the UK industry needs to expand their vision of ‘relaxed’ into something more like the 'reckless art' experience I discovered in Lagos. The industry will be stronger for it.

Ngaio Anyia is a musician, journalist, and inclusion and diversity consultant who recently presented Monumental : Bristol After Colston. She visited the Lagos Theatre Festival as an awardee of the British Council's International Bursaries for Bloggers, a pilot programme that supported UK arts bloggers to discover an international arts scene, make new contacts, develop their skills and get a piece of work published.

Lagos Theatre Festival was founded in 2013 by the British Council as part of its programme to foster exchange and collaborations between Nigerian and British artists. The festival was created to promote theatre in unconventional spaces and to encourage theatre makers to expand their practice and create works that can easily be situated into any given space.

Blog
'You don't have to speak for me because I'm here'